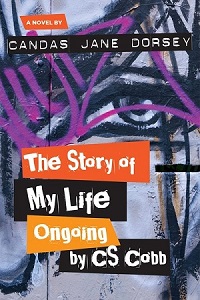 It’s not easy “choosing not to choose,” especially for a nonbinary teen in 2007.

Corey was born intersex, but their father and stepmother didn’t make a big deal about it. Then Corey’s dad dies suddenly. Now Corey’s disapproving mother wants Corey to “pick a side”. Corey’s old enough to say no to medical intervention—but not old enough to avoid being held in a youth psych ward when their mom makes an issue of Corey’s refusal to conform to the gender binary.

In the psych ward, Corey makes friends with Kim, a teen girl diagnosed as anorexic—or is she? As they work to unravel their pasts, they discover that Kim’s situation is even more dangerous than either of them had ever imagined.

Candas Jane Dorsey is an internationally-known, award-winning author of several novels, four poetry books; several anthologies edited/co-edited, and numerous published stories, poems, reviews, and critical essays. Her most recent fiction includes novels The Adventures of Isabel; What’s the Matter with Mary Jane?; and The Man Who Wasn’t There; and short fiction Vanilla and Other Stories and ICE and Other Stories. For fourteen years, she was the editor/publisher of the literary press, The Books Collective, including River Books and, for a time, Tesseract Books. She was founding president of SFCanada, and has been president of the Writers Guild of Alberta. She has received a variety of awards and honours for her books and short fiction, including most recently, the 2017 the WGA Golden Pen Award for Lifetime Achievement in the Literary Arts. She was inducted into the City of Edmonton Arts and Cultural Hall of Fame in 2019. She is also a community activist, advocate and leader who has served on many community boards and committees for working for neighbourhoods, heritage, social planning and human rights advocacy. She lives in Edmonton, Alberta.