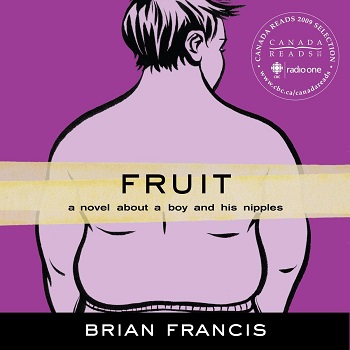 Toronto production company Hawkeye Pictures and Ottawa’s Big Jump Entertainment are developing Brian Francis’s novel Fruit as an animated series. The novel was the runner-up for CBC’s Canada Reads in 2009.

Set in 1984, Fruit follows the awkward misadventures of fat-and-fabulous 13-year-old Peter Paddington as he navigates life as a total outsider. Bullied everywhere, Peter has only two allies – his opinionated nipples who begin an unwelcome mentorship to help him survive Junior High.

“We are thrilled to be working with Karen, Rick and the whole team at Big Jump, and with the amazing Pat Mills to bring Brian Francis’s funny and beautiful novel to the screen. This feels like the right time to introduce a whole new generation to the wonderful world of Peter Paddington,” say Hawkeye producers Sonya Di Rienzo and Aeschylus Poulos.

“Bringing this exceptional story to the forefront of animation so that it can be experienced by new and steadfast fans alike, is an incredible opportunity. We strive to represent content that recognizes underrepresented communities; this coming-of-age story with a twist engages us all to contemplate what self-acceptance truly means,” says VP of Development for Big Jump, Karen Swerdfeger.

“We are ecstatic to be partnering with Sonya, Aeschylus and the Hawkeye Pictures team along with Pat Mills to bring this story of inclusion to fruition through the most exciting and creative medium that is animation,” says Rick Morrison, President of Big Jump.

“When I first read Brian Francis’s Fruit, I immediately fell in love. I laughed along relating to Peter’s struggles, his relationship with his family, his peers, his gender and sexual identity. I can’t think of anything more universal than feeling like an outsider at 13 and being uncomfortable in your own body. We’ve all been there and now, as adults, we’re desperate to laugh about it,” says screenwriter Pat Mills.

“While I was writing Fruit, I remember wondering who might connect to the story of this not-so-typical boy and his search for acceptance. But the years have shown me we’re all Peter Paddingtons at heart. I’m very excited to see the story in this new adaptation,” says author Brian Francis.

The novel Fruit is published by ECW Press.