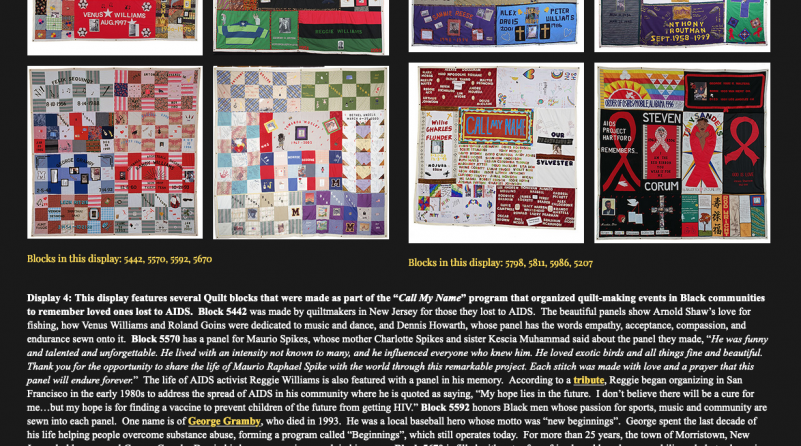 The special programming, available for free to the public, and uses the power and beauty of the Quilt and Grove to bring to light the countless Black men, women and children who have died of AIDS during 40 years of the pandemic, and the continuing impact of HIV in the Black community today.

“Our hope is that these online programs help raise greater awareness about the ongoing struggle with HIV and the impact systemic barriers have on positive health outcomes, particularly in the Black community,” said CEO John Cunningham. “This collection of powerful stories are part of the hope, healing and remembrance these two national treasures – the Grove and the Quilt – bring to our nation throughout the year.”

In the 40 years since the first cases of AIDS were reported, Black Americans and communities of color have been disproportionately impacted by AIDS.  In 1993, HIV was the leading cause of death for Black men between ages 25-44. By 2004, HIV became the leading cause of death for Black women in the same age group. In 2019, Black Americans made up 42% of the nearly 38,000 new HIV diagnoses in the U.S., with half of those living in southern states.  While today, Black people account for a higher proportion of new HIV diagnoses and people living with HIV compared to other races and ethnicities, progress has been made, with HIV diagnoses decreasing 8% among African American people overall from 2015 to 2019. However, racism, HIV stigma, homophobia, poverty, and barriers to health care continue to drive disparities.

The Virtual Exhibition of the Quilt features touching stories that include letters, news stories and photos about Quilt panels made to honor Black children, women and men who died and are forever remembered through the Quilt. Viewers can see a panel made for 2-year-old Alexzandria that shows her photo, a teddy bear, Big Bird, and a poem written by her mother Charlene on Block 2542.  Another shares the panel of Belynda, a Massachusetts AIDS activist who dedicated herself to helping organize Black churches in the fight against AIDS on Block 5718.  Other panels include those honoring Black men, including several that have military uniforms sewn into them to honor their service on Block 5976.

The Stories from the Grove features touching stories of Black lives remembered in the National AIDS Memorial Grove, whose names are engraved in the beautiful 10-acre space in San Francisco.  Tributes include musical legend Sylvester, AIDS activists Reggie Williams and Ken Jones, poet Mary Bowman, Sean Sasser, Hemophilia leader Val Bias, and Lonnie Payne, a long-term survivor and Board member of the National AIDS Memorial, who shares the loss of his twin brother Lawrence to AIDS.  Each story includes photos, curated narratives, and videos.

“The Grove and the Quilt hold a special place in my heart.  Both have provided comfort to millions of people during the darkest days of the AIDS pandemic,” said Payne.  “Today, they are important teaching tools to raise greater awareness about HIV/AIDS, particularly in Black and Brown communities where rates of infection continue to be disproportionate.”

Visit HIV.gov and the CDC to learn more about programs and services available.