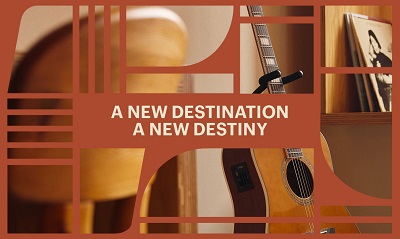 Toronto’s new Ace Hotel is now taking reservations for their anticipated June 15, 2022 opening, the first Ace venture in Canada. Located at 51 Camden Street in the heart of the Fashion District, the new 123 room property is built in homage to the rich history of industrial buildings in the former warehouse neighborhood, featuring red brick and exposed board-formed concrete.

The hotel’s public spaces feature North American materials valued for their intrinsic strength and integrity, and tied to Toronto’s layered history and natural resources including doug fir, red Toronto brick, and steel. Architectural elements like exposed joints, knuckles and brick are a point of focus, reflecting a deep respect for form and material and the ways they can compose unlikely juxtapositions that layer mood and style to shape authentic experiences endemic to Toronto’s multicultural nuance.

Entering Ace Hotel Toronto, guests will be greeted by a suspended lobby overlooking St. Andrew’s Playground
Park, site of the city’s first patch of green devoted to children’s play. The hotel’s public spaces are defined by an honest and refined material palette of concrete, clay, copper and wood that is echoed throughout the hotel’s public spaces as well as the guest rooms. Original artworks primarily by Torontonian artists will offer reflection and joy across the hotel. The guest rooms, conceived as urban cabins to offer respite from the city, feature deep-set window benches that invite conversation and closeness, and grant sitters bird’s-eye views of the park below.

The hotel also features dining from critically acclaimed Chef Patrick Kriss, who helms the signature restaurant, Alder, and a yet-to-be-named rooftop bar and lounge debuting later this summer. Widely regarded as one of the world’s top culinary talents, Chef Patrick Kriss holds the distinction of being awarded the title of “Outstanding Chef” by Canada’s 100 Best Restaurants consecutively from 2017-2020. His flagship Toronto restaurant, Alo, holds a rare four-star rating from the Globe & Mail, and his Alo Food Group also owns the popular and critically acclaimed local restaurants, Aloette, and Alobar.

The restaurant’s keystone is its wood-fired hearth and grill, which offer the simple yet effective preparation methods of open flame and smoke to gently transform seasonal ingredients selected at their peak. For the menu, Chef Patrick draws inspiration from the gastronomic traditions and techniques long-practiced in and around the Mediterranean. From starters to mains, dishes offer a spectrum of contrasting and complementary flavors, inviting guests to enjoy a refined casual style of dining. Alder features a full bar program pouring cocktails and local beers, and an eclectic selection of wines spanning a range of styles, varietals and both established and up-and-coming vintners.

Reservations beginning June 15, 2022 are available to Book Now, with opening rates starting at $349 CAN.