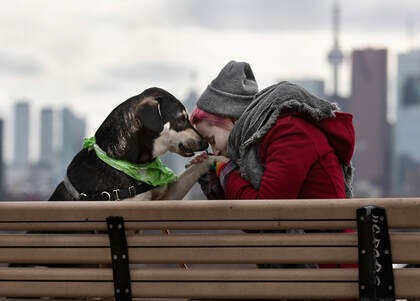 The Don’t You Want Me photography project examines the lives of queer people and their rescue dogs, and creates a visual global platform for them to tell their stories. Finding strength and purpose in the unconditional love, compassion and non-judgemental nature that is embodied in dogs, we watch the participants heal and transform. This reciprocal bond, and the stories and personal growth that spring from it, forms the backbone. DYWM also offers support and services to those participants who may be in need.

​Coupling compelling images and personal narratives, the aim is to cultivate empathy, understanding and admiration of queer people and their rescue dogs by highlighting this unbreakable bond. The travelling photography exhibit began in Bradford, Ontario March 8 to March 18, and will continue to different cities in Canada, including Vancouver, Winnipeg, Spryfield in Nova Scotia, Calgary and St. Catharines. It’s a photo project similar to the Humans of New York project with an image accompanied by a story of the people and animals in the photo. The tour is supported by Pet Valu.

Go here if you’d like to participate and tell YOUR story. Visit here to support the Project. Watch videos on the project here.

Originally from a very small conservative island in the English Channel, Jack (he/him) escaped his old life of finance and heteronormativity in 2012 with an unplanned move to Toronto having met a Canadian. During a forced period of being unable to work, Jack found photography and began studying what surrounded him – dogs, fashion and the queer and trans community. Jack founded alljackedup in 2014 and just as his work (and beard) were gaining traction, he was dealt a devastating blow of transphobia. Jack found himself with no secure income, little in the way of a support network and fearing homelessness.

Life became a living hell for over a year. One of Jack’s friends gave him the number of a boxer puppy advertisement and told him to call it like his life depended on it. It did, and he did. Jet Jackson bounced into Jack’s life in February 2017 and slowly life got back on track. Jack founded Doggy Dates Toronto – a dog walking and photography company in the fall of 2017. Jack is a proud AF trans man and sits on the Inspire Awards board and the board of Liisbeth Magazine – a feminist magazine for entrepreneurs and change makers.
​
Check out Jack’s work:
Doggy Dates website: Doggydatestoronto.com
IG accounts: @DoggyDatesToronto, @jackjacksonto

A native New Yorker, Deb (she/her) has spent her adult life with a camera on her face and a dog by her side. Her moves have spanned from Ohio to Boston to Brooklyn, where she did everything from location scouting for Scout Productions (‘Queer Eye for the Straight Guy’), waiting tables, running craft market events as Brooklyn Craft Central, doing PR as Girl on the Phone, being a star barista, running a record shop (Hi-Fi Rex), playing bass in pop bands, traveling the world, and fostering dogs in rescue (they totalled about 25). The latter sent her photography on a path she hasn’t strayed from.

Shooting dogs in foster turned into street portraits which turned into a small business involving capturing pets and their beloved families, something she loves and connects with. Her senior pup by her side, she continues to seek out amazing subjects and find out their stories. She is now connecting with her new Brighton, UK community.
​
Check out Deb’s work:
website: Deb Klein Photo
IG: @debkleinphoto