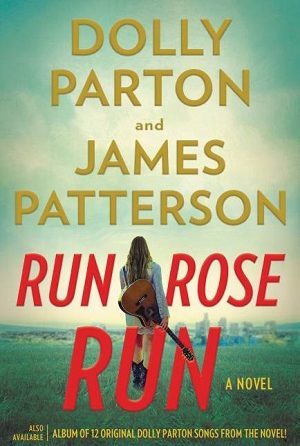 From America’s most beloved superstar Dolly Parton, and its greatest storyteller James Patterson, comes a thriller about a young singer-songwriter on the rise and on the run, and determined to do whatever it takes to survive.

Set in Nashville, “Run, Rose, Run” is a novel about a young woman who comes to country music’s capital city to pursue her music-making dreams. The source of her heart-wrenching songs is a brutal secret she has tried desperately to hide, but the past she has fled is reaching out to control her future—even if it means destroying everything she has worked for.

Every song tells a story. She’s a star on the rise, singing about the hard life behind her. She’s also on the run. Find a future, lose a past.  Nashville is where she’s come to claim her destiny.  It’s also where the darkness she’s fled might find her.  And destroy her.

Run, Rose, Run is a novel glittering with danger and desire—a story that only America’s #1 beloved entertainer and its #1 bestselling author could have created.

Available from Little Brown and Company

Fans will also be able to listen to original songs inspired by the book and written, performed, and produced by Dolly. She is also releasing a 12-track album of new material to accompany the novel. Run, Rose, Run is her forty-eighth solo studio album, and is released via Parton’s own Butterfly Records. The novel also includes lyrics to the songs, which are essential to the story.

As well, Dolly announced at SXSW that the book is being made into a film, produced by Reese Witherspoon’s production company, Hello Sunshine. She also revealed she’ll make an appearance in the film as one of the characters.