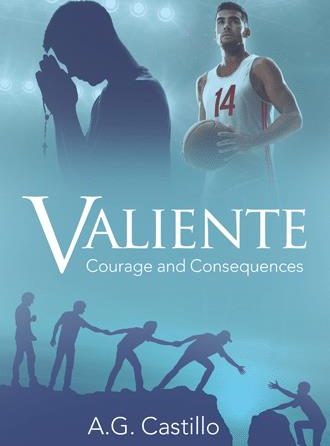 Valiente: Courage and Consequences – high school jock’s conflicting thoughts on his sexuality and love of sports

Valiente: Courage and Consequences showcases a captivating coming-of-age tale following Chente Jimenez, a high school athlete who must come to terms with who he really is before moving forward in life. Ever since his beloved father’s unexpected death and his best friend’s suicide, high school athletic phenom Chente Jimenez has been shutting out his family and friends in an attempt to protect his shattered soul.

When Chente decides to take a midnight jog on a sleepless, snowy night, he never imagines that his surprising encounter with his first-year basketball coach at a city park will unleash a series of events that will test his fortitude, challenge his courage, and awaken feelings he has guarded and suppressed all his life. While immersed in the final semester of his senior year, Chente soon becomes overwhelmed by the pressures of being an all-American boy, choosing the right college, and hiding his emerging homoerotic feelings from family and friends. Now as the Avalon High School basketball team races toward their first state championship, their starting-point guard must battle locker room homophobia and cyberbullying while attempting to boldly embrace his truth and become, Valiente.

Throughout the book, readers will witness Chente losing his father to a stroke, and his best friend, Jimmy, to suicide. These two tragedies cause him to shut out all of his friends and family in order to cope. Chente reflects on the last conversation with Jimmy, where Jimmy came out to his best friend and allowed Chente an opportunity to speak his truth. As Chente is trying to come to terms with the reflection he sees in the mirror, he accidentally outs himself to his entire high school, which leads to locker room homophobia and malicious cyberbullying.

Castillo pens a series of events that will test Chente’s resilience, challenge his courage and awaken feelings he has guarded and suppressed all his life. “Valiente: Courage and Consequences” shows Chente following his heart, his coming out story and the strong bond he has with his family and friends. By the end of the book, readers will be inspired by Chente speaking his truth and becoming the man he was born to be.

“I wanted this story to teach readers to love and appreciate the reflection in the mirror,” said Castillo. “ I hope it encourages individuals to let their family, friends and the world see who they really are, despite the consequences that may follow. Readers will see the importance of owning the narrative to their story through Chente.”

Ultimately, readers will understand the importance of living and embracing one’s truth. Castillo offers an authentic view of the lives of a lower-middle-class Latino family who embody the true meaning of acceptance and support. “Valiente: Courage and Consequences” displays real-life problems that not only members of the LGBTQ community can relate to but anyone who reads it.

A.G. Castillo was born and raised in a small West Texas town. After graduating from Texas Tech University with a degree in English, A.G. Castillo began his career in public education serving as an English teacher, high school basketball coach and principal, and as a superintendent of schools. When he is not traveling the world, A.G. Castillo resides in South Texas with his partner, Tim, and their incorrigible dachshunds, Puppy and Penny.

He is the author of the Valiente Series: Valiente: Courage and Consequences, Valiente: Tattoos and Temptations, and Valiente: Flames and Fury. All are currently available from Archway Publishing.