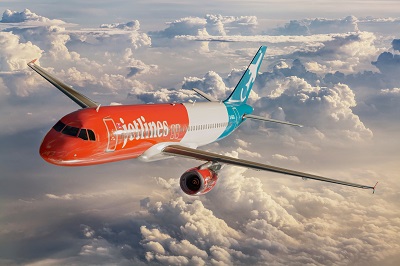 The new Canadian leisure carrier, Canada Jetlines, unveiled its first Airbus A320 aircraft on March 23 during a VIP/media event at the Region of Waterloo Airport (YKF). Attendees were able to tour the aircraft and get more insight into the airline’s progress towards takeoff. The first A320 was delivered to Jetlines in late December 2021 from Irish lessor Jackson Square Aviation.

During the event, Jetlines executives reiterated a targeted launch for summer 2022, as the airline predicts seasonal travel demand will return at record-breaking levels. This news comes just one week after Jetlines received Canadian ownership and control approval and the Stage 1 determination from the Canadian Transportation Agency.

The Vancouver-based airline is aiming to carve out a “sizeable” niche in the leisure travel market, targeting destinations like Mexico, the Caribbean, and Florida.

Jetlines board member Ravinder Minhas said the carrier is “going to do things different.” The airline intends to connect to new sun destinations and markets that are currently underserved — at competitive prices.

Deputy Mayor Michael Thompson, city councillor, Scarborough Centre, noted during the March 23 event that “virtually every single legacy airline is encumbered by the devastating effects of the Covid-19 pandemic. . . . But by starting from scratch as the pandemic subsides, Jetlines has been able to establish lower leasing costs and more favorable terms — and that’s just one of the things that they’re able to establish.”

Jetlines chief commercial officer, Duncan Bureau, reiterated this point, stating that the airline is “not in a position where our competitors are at, where they have had a tough couple of years in terms of their balance sheet. We’re starting with a fresh balance sheet.”

As for customer experience, the airline’s new A320s will feature the Recaro 3530 seat — which is a first among Canadian air carriers — as well as tablet holders at each seat and fly-by-wire technology. The airline has also said it will be offering specialty drinks and cocktails on board — as part of its goal to stand out.

Jetlines plans to operate a growing fleet of A320 aircraft, with a projected growth of 15 aircraft by 2025. The A320s are to be configured in a single-class, economy configuration.

The airline was originally founded in 2013 and planned to launch in the Canadian ultra-low-cost space in late 2018 or early 2019. That launch timeframe was pushed back, and in 2021, a new anticipated launch date of early 2022 was announced. In the meantime, the airline decided to change its business plan to focus on the leisure travel market.

Vancouver International Airport will serve as Jetlines’ primary base of operations. Additional bases and routes have yet to be officially confirmed.

Jetlines CEO Eddy Doyle confirmed during the March 23 event that the airline is “now in the final stages of the licensing process.”