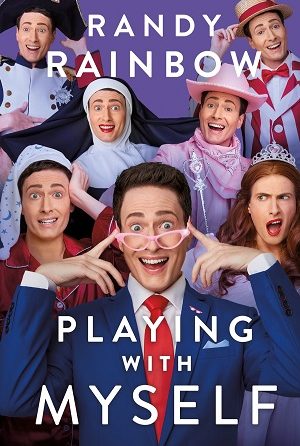 Playing With Myself is an intimate and light-hearted memoir by viral sensation and three-time Emmy-nominated musical comedian Randy Rainbow that takes readers through his life—the highs, the lows, the lipstick, the pink glasses, and the show tunes.

Randy Rainbow, the man who conquered the Internet with a stylish pair of pink glasses, an inexhaustible knowledge of Broadway musicals, and the most gimlet-eyed view of American politics this side of Mark Twain finally tells all in Playing with Myself, a memoir sure to cause more than a few readers to begin singing one of his greatest hits like “A Spoonful of Clorox” or “Cover Your Freakin’ Face.”

As Randy has said, “There’s so much fake news out there about me. I can’t wait to set the record straight and finally give people a peek behind the green screen.” And set the record straight he does. Playing with Myself is a first-hand account of the journey that led Randy Rainbow from his childhood as the over-imaginative, often misunderstood little boy who carried a purse in the second grade to his first job on Broadway as the host at Hooters and on to the creation of his trademark comedy character. In chapters titled “Pajama Bottoms” (a look back at the days when he wore pajama bottoms on his head to pretend he was Dorothy in The Wizard of Oz), “Yes, It’s My Real Name, Shut Up!” (no explanation necessary…) and “Pink Glasses” (a rose-colored homage to his favorite accessory), Playing with Myself is a memoir that answers the question “Can an introverted musical theatre nerd with a MacBook and a dream save the world, one show tune at a time?”

Chapter One Excerpt Below

Fine, I didn’t write that. But it’s how I really wanted the opening chapter of this book to begin. No phrase could more perfectly epitomize the last six years of my life, full of unimaginable highs and lows, for me personally and on the world stage. Unfortunately, my buzzkill editor has advised against direct plagiarism. Apparently Mr. Dickens would be none too thrilled. And you know Charles … Gurl is litigious.

Of course it wouldn’t be the first time I borrowed from one of the greats to create my own art. If you’re reading this now, it’s likely you’ve seen my song parody videos on the internet. It’s more than likely at least one of them has popped up on your social media feed, or in an email from your favorite aunt at some point over the last few years. Perhaps you were so inclined to share one of them with your friends from work, or your boyfriend, or his mom, or your cool pansexual cousin, or that other aunt who’s hopelessly devoted to Fox News but still has a commendable sense of humor and hard-core loves the score from Les Mis.

Or perhaps it wasn’t your vibe and you rolled your eyes after the first few seconds before dramatically untagging yourself from the post in protest and returning to your preferred guilty internet pleasure: potato-scratching ASMR makeup tutorials (or whatever you’re into). The point is, we’re together now and I forgive you!

Yes, it’s me! Randy Rainbow, or as many of you have inaccurately referred to me on various occasions throughout the years, “Rainbow Randy,” “Robbie Raincloud,” “Reading Rainbow,” “Ryan Reynolds,” and “oh, that queen.”

Of course, there’s also a fair-to-middling chance you have no idea who the hell I am (fame can be fickle like that these days). Perhaps I just looked too unbearably adorable on the jacket of this book for you to resist when you found it on the shelf at your local thrift shop or next to a pair of hideous Ivanka Trump made-in-China flats on the clearance rack at Nordstrom. Well, assuming you decided to throw caution to the wind and buy the book instead of those flats (which wouldn’t have gone with anything in your closet anyway), please rest assured, I am extremely famous.

When they first asked me to write a whole book, I was hesitant. Sure, I’d already done a lot of autobiographical writing in my day, but mostly on Twitter. And after careful research, I determined that books often require more than 240 characters. “Fuck that,” I concluded. (See what I did there?) I know, you’re probably rolling your eyes and thinking, “Get a load of her, turning down book deals in this economy…,” and you’re right.

Then I realized what a golden opportunity this could be, having now reached a certain level of maturity, to finally come out! Not in the way I came out to my best girlfriend Kelly in a hotel bathroom at the Tampa Marriott during the Florida State Thespians competition of 1999. When I say “come out,” I mean more like in the “eighteenth-century aristocratic debutante presenting herself to society” kind of coming out. I never had a proper bar mitzvah because I dropped out of Hebrew school. And I never had a quinceañera like many of my friends because when I turned fifteen, my mother insisted I was not a young woman of Latin American heritage. So let’s think of this book as a combo of all those time-honored, coming-of-age traditions I missed out on (minus the shitty DJ and plastic party favors).

See, if you’re familiar with my work, you are likely familiar with my persona—the heightened-reality, campy, scripted, comedic version who often breaks into song. Sure, that’s one part of me, but what you may not realize is that behind that bubbly character is an actual person—an introverted only child, full of angst, flaws, insecurities, past heartbreaks, and yes, impossibly perfect bone structure. Hopefully, as you read on, you’ll come to know more about the person behind the persona behind the pink cat-eye glasses. But why not, let’s kick right off by dispelling some of the most egregious “fake news,” alternative facts, lies, myths, and propaganda often circulating about me.

It was once written in a review of my work that I am the love child of Harvey Fierstein, Bette Midler, and Anderson Cooper. While I was not able to fully corroborate this genealogy on Ancestry.com, nor can I practically imagine such a romantic tryst among those three gay icons (actually, now I’m totally imagining it, and so are you), I’m gonna go ahead and say that one’s true. (Hey, it’s my book.)I’ve seen a number of QAnon-style conspiracy theories about me perpetuated by cyborgs, trolls, and bots on social media. Recently, one such tweet referring to me as a “little mutant freak” claimed that I am “a CIA asset, probably born in a lab somewhere.” This is also entirely true.Some extreme right-wingers seem to believe I’ve been hired by Nancy Pelosi and the DNC to push their agenda. Joking aside, this is false. Believe it or not, my work is not at all politically motivated and neither am I. I’ve never been a political junkie by nature, and I’m not a pundit. My “shtick” as a topical comedian and satirist has always been to cover whatever you, the audience, are talking about. It just so happened that around 2016, y’all started talking about nothing but politics (I wonder why…), and I simply followed suit! While, like many, I have become much more woke to those topics over the years, and while some of my spoofs may contain a heavier dose of my genuine opinion than others, my work is rarely a personal testimony, and never a political endorsement, or even condemnation, in any grown-up sense of those words. It’s merely a colorful snapshot of a moment in time as I see it, a funhouse mirror reflection of all sides. That has at least been my intention to this point, anyway. So don’t act so surprised when you tell me your Republican mother loves me, too. I’m not. Why the hell shouldn’t she?Yes, it’s my real name. “Randy Rainbow” (not Randall, not Randolph, not Randoncé) is the name that appears on my birth certificate, my New York State ID, my Social Security card, and in black Sharpie ink on the inside of every pair of underwear I own. I know, it sounds like the corniest stage name ever. Believe me when I tell you, I would not have chosen it for myself. It was a very difficult childhood (just read the next few chapters!). My name may seem perfectly on-brand now, but frankly, that’s only because I had no choice but to grow into it! For all those birthers out there still demanding receipts, here, once and for all, in plain black and white, in the very first chapter of my very own book, is everything I presently know about the official origin of my very real last name.My great-great-grandparents, the Regenbogens, lived in what was then Austria-Hungary—likely between 1860 and 1880. Like many other Jews, they fled to England to avoid religious persecution. The German word regenbogen was literally translated to the English word “rainbow.” The freshly minted Rainbow family became domestic servants in Great Britain (it’s believed they served royalty and were somehow well known and highly regarded). Around 1900, they immigrated to the U.S., and since their name was already anglicized, no changes were made. Had they arrived as the Regenbogen family, it probably would have been changed to something like Rabinowitz, and I might quite possibly be an accountant today.

There you have it, folks! The explanation you’ve all been clamoring for. I’m sorry it didn’t include unicorns or Judy Garland like I’m sure you anticipated. Trust me, I was disappointed about that myself. Of course, this long-standing mystery still begs the question as to why—knowing what a cruel world they were bringing their child into—my parents went right for the double-R alliteration and named me Randy. Sure, the kids on the playground still would have tormented me had I been John Rainbow or Adam Rainbow, but at least my name might have made me sound a little less like a cheap drag queen or the title character on a public access children’s show when my elementary school teachers shouted it out during roll call. Well, the answer to that question is quite simple: My parents hated me. (I’m only half joking.)

So now that I’ve formally introduced myself and my forefathers, without further ado, here’s the rest of my story so far. Some parts will be funny, some might be sad, and some will hopefully inspire you to follow your dream, call your mother, or maybe just stay home and play with yourself. It’s not the entire story, mind you. This isn’t a completely comprehensive memoir (I haven’t quite reached Michelle Obama status yet). It’s merely a colorful snapshot of a few moments in time as I’ve seen them, starting at the beginning-ish and following my wild ride down an unconventional path, through an unprecedented time, and right here to you.

Please silence your cell phones, refrain from flash photography, sit back, relax, and enjoy. The role of Randy Rainbow in this book will be played by—you guessed it—Randy Rainbow. And yes … that is his real name.