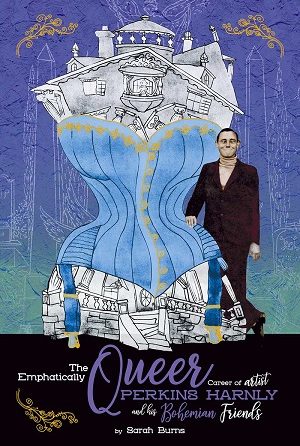 The Emphatically Queer Career of Artist Perkins Harnly is the story of a Nebraska-born artist (1901–1986) who crossed paths with a staggering array of famous and infamous personalities. He stole a box of bon-bons from Sarah Bernhardt. Was friends with Paul Swan, a.k.a. “The Most Beautiful Man in the World,” who made women swoon when he danced in his tiny leopard-skin tunic. Was the frequent houseguest of Rose O’Neill, the free-living, gin-drinking artist who invented the Kewpie Doll. Hobnobbed with Elsie de Wolfe, the celebrity decorator who invented the blue rinse and dyed her poodles to match. And was a dedicated correspondent of Alexander King, the gabby Viennese morphine addict whose circle included William Seabrook, author and occasional cannibal responsible for introducing Americans, for better or worse, to the zombie.

The story follows Harnly’s steps from Nebraska’s remote farmlands through silent-era Hollywood, post-revolutionary Mexico, Depression-era New York, war-time Tinsel Town, and finally, to Culver City, home for the remainder of his life. Harnly traveled extensively in Europe and South America, where he indulged in his hobby of visiting the last resting places of legendary people from Vladimir Lenin to Oscar Wilde, Queen Victoria, and Eva Peron. While offering excursions into Harnly’s darkly playful paintings of Victorian boudoirs and haunted cemeteries, Sarah Burns uses archives of letters and interviews to illuminate the adventures of Harnly and his circle of outrageous friends, whose antics outshine the notorious Bright Young Things of England. Once you meet Perkins Harnly, you will never forget him.