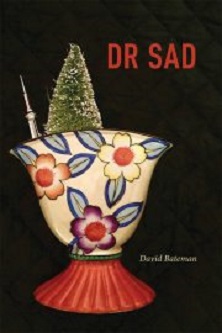 You know immediately when you are in the hands of a master wordsmith. David Bateman, novelist and poet, is just that. His elegant sentences and witty wordplay are as lithe and adept as the movements of a trained dancer. Whether talking about pure sex or the intricacies of the heart, he lets his words lead.

Stephen Davis is the Dr. Sad of the title. A professor of poetry sprinkling pearls of wisdom among the millennials who either adore or defy him, he has come down with a case of HIV just as he is deciding whether he has enough of what it takes to soldier on in life, raging at the dying of the light or letting himself slip sadly away into its embrace.

Arriving at an age where many of us question our beliefs and accomplishments, comparing what we aspired to be with what we’ve become, and starting to square the difference, Stephen comes face to face with his fears when he takes a job on a new campus in BC. With students whose study methods and belief systems are set to make him feel like an unwelcome visitor on planet Earth, or at least their little part of it, he has his hands full trying to take charge of his life and make sense of where he has crash landed.

The sections in BC are interwoven with passages from his life in Toronto and past relationships, while an incident that may have been attempted murder leaves him a suspect. As he comes to grip with his new circumstances, both geographical and metaphorical, he finds himself slowly drawn to the landscape, that great Canadian crucible of self-transformation, and learns that growing means letting go. It is a heady delight to read.

Available from University of Calgary Press.