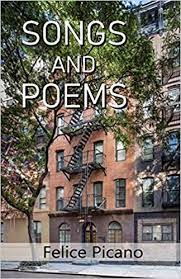 In a career spanning nearly half a century, embracing memoirs, literary fiction, sci-fi and thrillers alike, it’s odd that Felice Picano’s oeuvre has boasted only one full poetry collection—until now. It may be even odder that but for an act of serendipity this belated second volume might never have happened.

His first collection, The Deformity Lover and Other Poems, was published in 1978. It seemed to promise more to come in the same vein. When that didn’t happen, however, we were able to turn in time to his literary novels, like Onyx and Like People in History, for the extended pleasure they offer. Still, there was a sense that something was missing or at least put on hold.

That something was spurred into action recently by the long-overdue reappearance of two files, returned to him by a friend living in Spain, after decades during which Picano had thought them lost. This collection is divided between early pieces composed before The Deformity Lover, and later pieces written afterward, the seeming simplicity of the first offset by the complexity of the second.

This is a place where whimsy and profundity are not afraid to rub shoulders with one another. Here we have the “Drambuie kisses/and Tupelo honey” of New Orleans Girls riding up against the weight of the unanswerable, in June 26, 2015: “Had he lived/Would we be celebrating/Our momentous today?/Or quietly, simply, be letting it go …?”

His Aubade gives us the fragility of post-coital love: “The late afternoon storm we ignored/Has fled back to the ocean…” while My Mother’s Life tells us of a woman whose “life [is] doled out in dinners/lunches, breakfasts.”

A facility for classical form reveals itself in Hillyard’s Complaynt to His Model: A Sonnet (inspired by the Elizabethan painter Nicolas Hilliard, rumoured to have slept with Christopher Marlowe): “I think that Nature’s folk do all conspire/To blind me quite, that you may beam more bright.”

The earlier section is rounded out by a moving elegy, In Memoriam: Wystan Hugh Auden, 1973, written on learning unexpectedly of the death of his friend and mentor while out shopping: “How can you hear an era end/in the whoosh of a push-pad/supermarket door?”

Star spangled with joys and regrets and the patina of memory enjoyed a second time around, these are intimate glimpses from the lifetime of one writer who for years has been dedicated to telling us who we are and how we got here. It is a triumph, a small joy salvaged from the scrap heap of time.