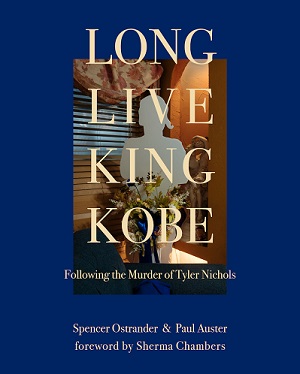 No one ever wants to receive word that their sibling, child, grandchild, or friend has been killed by a random act of violence, yet in recent years it has become more common place that we would like to hear.

Long Live King Kobe: Following the Murder of Tyler Nichols  tells the story of a heart-wrenching but ultimately empowering story about the senseless murder of a young man and how a community is rallying not only to prevent further murders but also remember him and those who the media have forgotten. It is an intimate portrait of grief, the book is a chronicle that charts the devastation visited upon a large, multi-generational family in the wake of a senseless, random murder of 21 year-old Tyler Kobe Nichols on December 23, 2020.

Filled with photos by celebrated photographer Spencer Ostrander with text from writer/author/screenwriter Paul Auster (Burning Boy: The Life and Work of Stephen Crane, 4321) collected from the words and emotions from Tyler’s mother Sherma Chambers, Long Live King Kobe is both an intimate picture book  of places and images in the wake of Tyler’s death as well as heart-warming/wrenching anecdotes and remembrances collected in the time surrounding his murder.

Tyler’s mother Sherma has also created a foundation called The Long Live King Kobe Foundation whose mission is to combat street violence with compassionate, peaceful initiatives and offer support to the families of victims.  All proceeds will be donated to the foundation. Tyler’s murder happened in broad daylight and all he got was quick story in the Daily News and was quickly forgotten.  So this book aims to remember those forgotten and to heal a community.

Among the initiatives that will have arisen from the Foundation are “healing sessions” which they intend to organize monthly (neighborhood people get together, unite and are led into communal examinations of their grief.  It’s a beautiful thing). The next healing session will be in April.  It might be a good opportunity to film and interview attendees as well as Tyler’s brother Kareem who organizes them.

While the wave of violence increases around New York City, this story is universal as violence against and within the Black and POC communities is on an alarming rise.. “It was a weird and senseless crime,” renowned writer/author Paul Auster writes. “A sudden, unprovoked burst of violence, on a tranquil street in a tranquil Brooklyn neighborhood on the eve of Christmas Eve.”

Photographer Spencer Ostrander was documenting the locations of mass shootings for a book he was working on with Paul Auster when he visited a funeral home and learned about Tyler’s murder. Though Tyler wasn’t killed with a gun, his mother, Sherma Chambers, and Ostrander connected immediately. In collaboration with the Nichols-Chambers family, they forged a new project. Chambers invited Ostrander to document Tyler’s murder and the void it had created in his family. Over the next several months, Ostrander conducted interviews with each member of Tyler’s household and his closest friends. In the natural light of those settings, he assembled a collection of photographic portraits of each person involved in the story.

The work that emerged, Long Live King Kobe: Following the Murder of Tyler Nichols, documents one family’s grief in order to give shape to the human faces devastated by violence. With Auster’s deliberately spare, unsentimental text that effaces the sensationalism of crime reporting, Long Live King Kobe re-sensitizes us to the extreme violence to which America has become inured. “Every day on local news there are stories of shootings and stabbings. The next day—what happens to those people’s families?” says Kareem Eusebe, Tyler’s cousin. In Ostrander’s photos, the fragments of trauma aren’t made to disappear. They are rearranged into a celebration of life. “The goal of Long Live King Kobe is to open up a portal of healing and to bring light to as many people as possible.”

Long Live King Kobe builds on the work of the Nichols-Chambers family, which has launched a community-driven foundation of the same name. The Long Live King Kobe Foundation (LLKK) aims to prevent street violence through compassionate and peaceful initiatives and to support families who have suffered from similar tragedies. In a recent series of healing sessions, the LLKK Foundation has brought together mothers and brothers who’ve lost loved ones to violence and has given them recognition and support that city courts and counselors so often fail to provide. As one mother who attended a healing session told News 12 Brooklyn, “These mothers are my strength. Without them, I wouldn’t be able to be standing here right now speaking to you.”

“My vision is to open a community center,” says Chambers. “So that someone who experiences this kind of trauma can speak to someone who’s going through the same thing and heal.”

All proceeds from the book will be donated to the Long Live Kobe foundation.