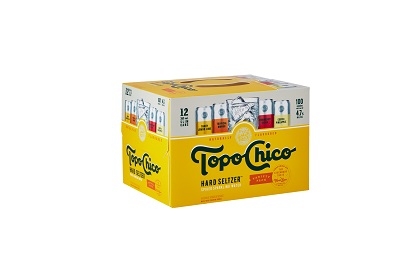 Topo Chico has more than a century of Mexican heritage as a mineral water, before launching their Hard Seltzer in the United States in 2021, and after great success there it’s now available in Canada as well as of May 2, 2022.

The legend of Topo Chico Mineral Water begins with a Mexican emperor in the 1400s, who searched far and wide to find waters to restore vigour, strength, refreshment and joy. Once found, he named the water after its mountainous source, and the story continues to intrigue fans around the world to this day. The mineral water was brought to the United States in 1987 only to reach cult status, thanks in part to its limited availability across Texas and California.

The Coca-Cola Company acquired the brand in 2017 and has helped it become nationally available in the United States. The immense fandom for Topo Chico Mineral Water was created because of its refreshing taste. It’s been called stunningly thirst slaking and made with a confident,intense carbonation.The legend of the brand continues to evolve as a staple in culture, known as the drink of choice for some of the most famous names in entertainment.

Topo Chico Hard Seltzer can be found nationally (with the exception of Quebec) at your local liquor store, starting May 2. It can be found in four distinct and unforgettable flavours: Strawberry Guava, Tropical Mango, Tangy Lemon Lime, and Exotic Pineapple.