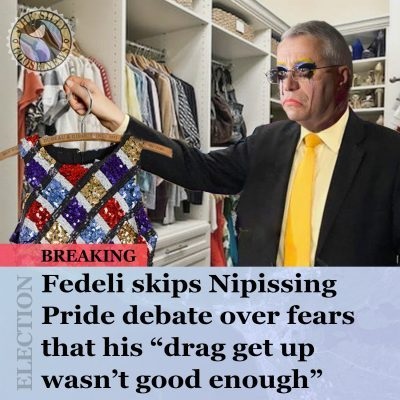 North Bay Pride held a local candidate debate on May 13, 2022 inviting every candidate that was on the ballot, unlike every other debate. with five out of the eight candidates participating. Missing were the new Ontario Blue Party candidate, Taylor Russell, Giacomo Vezina from None of the Above Party, and the incumbent MPP Vic Fedeli from the Conservative Party.

There were no real fireworks this time around, but there were good questions with interesting answers. We had lots of questions through online and few from within the theatre. However, the place had only maybe 50 people inside, and around 500 viewers online. Yet most people demanding to be heard were not there. Politics affects everything you do every day, yet you do not want to be heard or make things better.

Many people in our community complain about access to policy makers like the Premier. Many have felt that our voices, including other marginalized groups, are never heard in a debate. Many of you demand to be heard by political leaders. When hearing these voices demanding to be heard, some people get inspired and create the opportunity to share your voice and your questions with political parties and their leaders, then you do not show up. Why? You made a demand, got what you demanded, then stayed home instead of following through. I am so baffled by this.

There is no doubt that the 2SLGBTQ+ community has its own challenges within. We can be dramatic, we discriminate against age, HIV, and so forth. Sometimes, we are a hard community to live within, let alone the outside world. However, when one of us gets hurt or insulted by someone outside our community, the majority of us get our nails out.

Sigh…. I totally get it. Politics often seem like an impossible task, because it seems like Political Leaders do not want to have a direct conversation with us, that is both federally and provincially. Often, we feel left out in the cold while a str8 cis white man tries to mans-plain what the 2SLGBTQ+ needs or wants. That is what you allow to happen, because when you get the chance to create the voice to be heard, you worry about Pride celebrations and forget how much more work needs to be done so we are equal and heard when we want to be heard, not when someone feels like listening. This is not change. This does not help us.

We have questions, and they have answers, but you do not ask them? millennial voters have similar issues that seniors do. They cannot afford to buy a house, while seniors are struggling to stay in their house. You may think your voice is only about you, but just look at the similarities between a millennial and a senior.

Just vote. Stop saying you do not matter when it comes to voting. If we stop juts thinking about “me” and go vote, there is a chance you will change the outcome of an election to someone you want to see.

See you at the polls Pigeon!