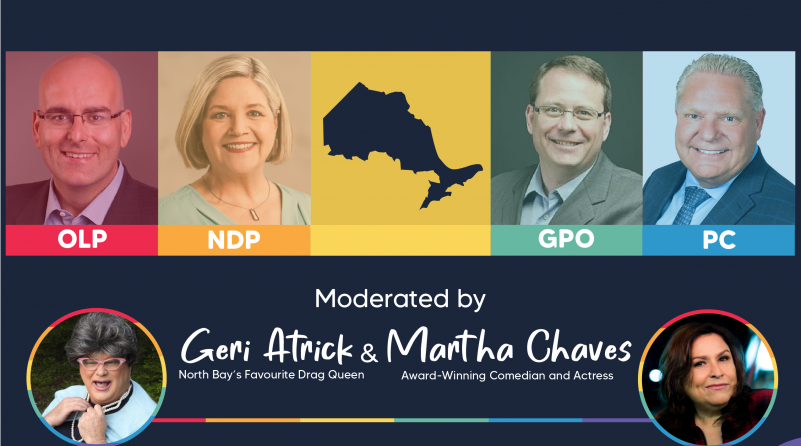 Queer Vote Ontario – it’s time for the LGBTQ+ community to have their political voices heard – May 26, 2022

On May 10, 2022, the first Provincial leaders debate took place in beautiful North Bay, Ontario. Mike Schrenier from the Ontario Green Party, Steven DelDuca from Ontario Liberal Party, Andrea Horwath from Ontario NDP and of course, Doug Ford from the Ontario Conservative Party. You can watch this debate online here. It has been viewed about 20,000 times through the various social media outlets which speaks volumes about voter engagement.

The Federation of Northern Ontario Municipalities (FONOM) brought the debate together and asked the leaders to participate only a few months ago. The leaders of the four parties agreed quickly. However, there was a price tag of $125 per person if the public wanted to attend the debate in person and try to ask a question. As far as I am concerned that is just not acceptable. How can the voters ask their questions? How can everyday folks afford this price tag to access the leaders? How do you run for government without talking to the people? Why do the same people get access to the leaders that always have it? 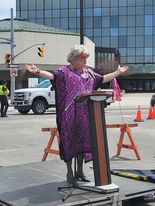 There was a rally outside the theatre that I was the host for. It just allowed folks to ask their questions outside The Capitol Centre. Of course, no one answered them and all the leaders except Mike Schrenier from the Green Party, came out of their vehicles and buses to talk to the people at the rally. Many were supporters of the NDP, but Andrea waved her thanks and went straight into the theatre which was still better then Doug Ford who just ignored everyone until he got to his supporters that were at the door of the theatre for the Leaders to enter. Strange thing though, no other party supporters were allowed to show their support at the door, just Doug Ford supporters.

However, watching the debate was like watching paint dry. It was the same old questions, the same old answers with the same prepared speeches and answers. I love politics and debates, but nowadays it seems that voters are looking for something new. However, the politicians and leaders seem to have missed the memo.

For example, when asked about mental health in Ontario, they all said they would invest in it, however, not one leader addressed the 18 month waiting list to see a mental health professional. No one challenged Doug Ford about him claiming to create over 500,000 new jobs in Ontario, because it raised the question are you including the people that returned to work after restrictions were lifted due to COVID. There was no representation of Indigenous folks, marginalized folks, or any other underrepresented voices, and that is a BIG problem.

The other thing that really stood out, was how Doug Ford claimed to be making the biggest investments in healthcare, which stumped me for a second or two, because he was the first one to make cuts to healthcare and Long Term Care homes right after he was elected. So, to claim you are investing is far from the truth, because you are just replacing all the previous cuts made by all governments from the past thirty years. Doug Ford was not the only Premier to make cuts. But no one questioned it to get clarification, not even one of the other leaders, which of course, is just the same old debates we have seen for so many elections.

The question does come up, when will political leaders see the benefits in new type of debates? Because they can be much better. North Bay Pride has asked the leaders for a provincial debate led by the queer community. Making a real community debate that includes all communities that we live in. Ensuring all voices get the chance to ask their questions. They have been told many times its a great idea, or I am in by some leaders. Mike Schrenier has always been the first to accept the invite to any debate. Yet, when the time comes, the other leaders and their campaign teams go for the same old debates. I get it though, it’s safe. Like the FONOM, they kind of know the questions before they are asked, so they can prepare, and they can make themselves sound great. New is scary and no one especially leaders want to look bad in anyway.

However, they would definitely look more human if they made a mistake or did not know the answer, because let us be real, they are human too, they just forget to show it. With the debate Pride was offering, there is no prep they can do, because the questions come right from the communities we live in. We were also going to take some questions that were live while streaming the debate.

I am not saying the leaders knew the exact questions they were going to be asked, however, I can pretty much guess what the questions will be and certainly can give the answer the leader will before they speak. But that is the problem, isn’t it? The parties want people to vote for them. They get out there to door knock, take out ads, raise millions of dollars, run around the province trying to promote their campaigns to get your vote. But, we already know the leaders and the platforms for each party, so why do they keep talking about it?

If they wants votes they need to explain how they will implement something. What does it do for you and me? How does it help you or me? I mean really, who watches the announcements when the leaders want to make an announcement? I think its just the media basically, which raises a question too. Why are the media companies are also not asking the questions that we need answers too? They keep asking the same questions. Why do the big media not ask the leaders why they won’t participate in such a debate as North Bay pride offered? I guess this would be a good time for conspiracy theorists to jump in…lol. Even when there is a marginalized voice at a debate, its tokenism at best.

What has happened though over the last few weeks, is that a meeting took place through Zoom with Ontario Pride organizations, talking about representation in debates. We learned about Queer Vote Ontario who are taking the lead to create an all-party candidate debate in Toronto on May 26, 2022, being held at the Metropolitan Community Church of Toronto (115 Simpson Street) starting at 7:30pm. Queer Vote Ontario is a non-partisan campaign to put 2SLGBTQI+ issues on the agenda in the 2022 Ontario Election.

You can watch it FREE as debates should be. It is FREE to ask your question. You just need to watch it online on Pride Toronto’s Twitch channel. No leaders have confirmed attendance as yet, however representatives from three parties have, with the exception being the Conservatives. If a party does not show up, that should speak volumes to any voter.

The exciting part is that I, Geri Atrick, have been invited to moderate this debate. For the first time ever in Canadian History, a drag queen will be the moderator of a provincial party debate. Not only myself, but I will also be joined by the amazing comedian Martha Chaves who you may have seen on TV and on comedy tours. What could be better than this?

This debate is a step in the right direction. This is the change politics needs. This is the start of a change we need. We can be the change; we just need to start the change.