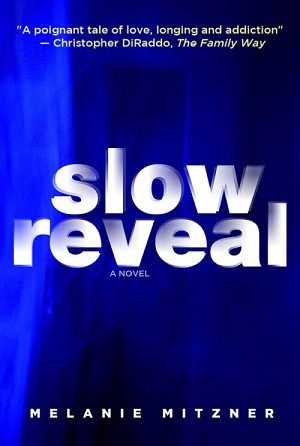 Set in 1990s New York, Slow Reveal paints an extraordinary portrait of artists who defy the arbiters of culture and challenge social norms. Art, addiction, and family dynamics capsize the Kanes when they discover the parallel life of Katharine, film editor, mother, lover, and wife.

“A poem is never finished, only abandoned,” wrote Paul Valéry, an outcome echoed in her decade-long affair with Naomi, a lesbian poet. Katharine’s marriage to Jonathan collapses in his struggle with sobriety when he’s ostracized for politicizing art and abandons his career for advertising. Faced with confrontations from her two grown daughters, an installation artist and an aspiring writer, Katharine hangs onto her former life. When unforeseen tragedy strikes, devotion and commitment are not the guardrails that keep their work or relationships on track but rather a form of entrapment.

A captivating story about relevance at the end of the 20th century, the novel questions the voracious demands of contemporary society through a riveting portrayal of turbulent family life, impacted by art shaped by the media and influenced by social and political injustice. Success is redefined by the courage to embark on the artistic process, as risky, messy and unpredictable as building intimacy and trust in love.

Melanie Mitzner is a Montreal/New York writer. She is an Edward Albee Fellow and a finalist in four fiction and screenwriting competitions. Former journalist and publicist in tech/broadcasting and co-founder of The Groovy Mind, Melanie’s work focuses on political, social and environmental justice. Slow Reveal is her debut novel. She is also toiling away on a controversial new book, The Expat.

Naomi took a hot bath instead of a morning shower. Her body ached and her throat felt like seared sirloin. No small wonder after the snowy trek when she was practically flattened by a dump truck, weaving on a reckless descent down the cliffs surrounding the falls. For a while she couldn’t move, afraid she’d broken a bone and she’d be laying there frozen to death by the time someone found her. Lucky or in her opinion, unlucky. Now she had to endure a fever of 103 in the confines of a cabin in the middle of east bum fuck.

The dead die hard, she thought, as she breathed into the aches and pains for relief. That’s what her acupuncturist told her. To embrace the pain, ease into it. Once she tried to explain the concept to Katharine who had ovarian cysts. “What a bunch of crap,” her lover replied, flinching, pressing her palm to that burning sensation in her pelvis. Naomi held her in her arms until she pulled away. After the surgery, a year of utter confusion followed, when Jonathan took

responsibility for the kids while Katharine ran off to recuperate by seeking refuge in an extramarital affair that turned into a lifelong relationship. The word lifelong stuck in Naomi’s craw like a hook in a fish. That’s how she envisioned it, with or without the family Katharine had started. Never did she imagine being out of the picture completely. She couldn’t conceive of The End.

Theirs was not a transactional love but one filled with passion and ardor. Like art, a creative process, the failures a means to success, the process an end unto itself. Something that over time would be realized, even though from the start it felt like it was complete. Hot water cascaded over the ankle she twisted in her acrobatic leap off the highway. The heat radiated from the cast iron stove, keeping the cabin exceptionally warm. She would sweat out the fever under a pile of blankets while she worked on her poem “Animal Magnetism.” The object of the urge…the urge of desire…The desire to object.

Her words were empty vessels from which she drank the pressed fruit. Nothing left but the hollow darkness and the dank smell of sour wine. She could blame it on the fever that blanketed her thoughts with ellipses, those three lazy dots conveniently poised after a phrase to suggest something one couldn’t articulate, something incapable of defining, more often meaning less than one intended.

Entombed by the woolen comforter, she lay on the tattered couch in front of the plate glass window and looked past the gulch that dipped then soared in a dramatic display of forest pines planted along the cliffs skirting the falls. The sky peeked over the mountain range with a show of storm clouds waiting to happen. Another snowfall on the horizon. That much she knew or in other words, nothing much at all.