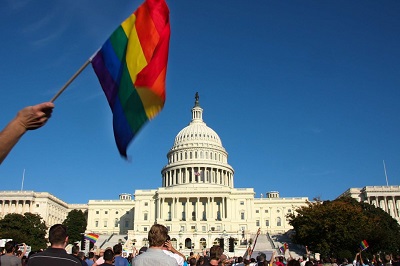 D.C. is back open and better than ever. Plenty of outdoor spaces keep you COVID safe, and of course the Smithsonian Museums are all free. Summer is the value season where hotel rates are reasonable. Plus, it is the arguable one of the  gayest cities in America.

You can practically walk everywhere, and yes you will run into famous folks. I had the pleasure of meeting White House Deputy Press Secretary Kareen Jean-Pierre at the Victory Fund Brunch at the Grand Hyatt, a Haitian immigrant who was raised in New York City as well as the Attorney General of Massachusetts, Maura Healy who is running for Governor.  The Equality PAC also had a fund raiser at the Number 9 bar when I was there where I ran into my friend, Arizona State Representative Daniel Hernandez who is running for Congress in the 6th District (Tucson). Long story short, expect to run into someone famous in D.C.

Don’t miss the Smithsonian’s Portrait Gallery/American Art Museum for their orchid display in the atrium, the portraits of every U.S. President, and the new Watergate display. You will find them at Gallery Place/Chinatown Metro. The nearby Smithsonian Building Museum is another must. Check their websites to see if they require (free) tickets in advance and their hours of operation.

Walking around the Dupont Circle/Thomas Circle/Logan Circle neighborhoods is fun. The U.S. Botanical Garden features orchids and a tropical garden as well as an outdoor garden that showcases mid-Atlantic native plants. The climate is so mild in D.C. that they even had a palmetto.

Meet up with the walkers at D.C. Frontrunners at 23 Street/P Street NW (near Dupont Circle) Saturdays at 9:30 a.m. (or run with them at 10 a.m.). We walked around Georgetown and then down along the Potomac River. Usually they walk or run up Rock Creek Park which goes up to the Zoo. They meet next to a statute honoring Taras Shevchenko, a Ukrainian poet. This friendly group is a great way to meet locals. D.C. folks are an interesting highly educated bunch: lots of politicians, political types, etc. As a very transient city, it is easy to meet people from all over.

I snagged tickets to the spring White House Garden Tour. You can check with your Congressperson or Senator to see about White House Tours or simply walk around the National Mall and to the monuments on your own. Don’t miss the Sunday farmer’s market in Dupont Circle where you can grab locally grown produce or sample the local coffee, Zekes.

The gay scene is no longer in one neighborhood as in days past (where it was in Dupont Circle then 17th Street NW). The new Kiki Bar at 919 U Street in the Shaw neighborhood has an upstairs dance floor and is the place for Sunday afternoon see and be seen and you can mingle with the Stonewall Kickball crowd. The next-door companion bar, the Dirty Goose, is also a lot of fun as is Nellie’s, the sports bar across the street.

My favorite bar is the Number Nine on P Street NW (across from Whole Foods) which has something going on every night on their second floor. Around the corner is Trade (on 14th Street NW) which features a large outdoor patio.  The Green Lantern is another downtown bar that features a fun happy hour and other events. The As You Are bar on Capitol Hill is the newest addition to the scene.

D.C. has a great restaurant scene with innovative dishes featuring chefs from all over. You cannot beat Sweetgreen, the fast-casual salad chain and more including the one on P Street NW. Try the fish taco salad with steelhead salmon. This concept restaurant was started in D.C. by two guys sick of dorm food at a local college and is now going national. Zaytinya is my favorite for Mediterranean food. The small dishes let you sample a lot. Rasika (633 D Street NW) is a must for the best Indian food in the U.S. which my friend tells me is showcasing Indian street food.

The Red Bear Brewery in the NoMa neighborhood (209 M Street NW) had great IPAs. The next door REI Co-op is also a shopping experience in a historic recycled building that was once a music hall. Try the new Planta vegetarian restaurant in nearby Bethesda. You can even bike up from D.C. Annie’s Paramount Steakhouse on 17th NW is a long-time staple for the LGBTQ+ crowd and is great for people watching or Sunday brunching. They have outdoor seating as well.

I always stay at the Comfort Inn Downtown DC/Convention Center at 1201 13th Street NW. It’s close to the stores, restaurants, and shopping on 14th Street NW and an easy walk or Metro to the museums and other attractions. Other great options I have stayed at include the Washington Plaza Hotel, the Tabard Inn, and the Beacon House.

GETTING THERE/ GETTING AROUND

I flew into Reagan National Airport (aka DCA), and it took just 35 minutes to get from the airport to my hotel. (Take Metro (Convention Center, Mt. Vernon stop) to my hotel, the Comfort Inn and Suites at M Street and 13th Street NW which is a short walk west of the Metro). Amtrak goes to the magnificent Union Station and features the Acela express train to New York City and catch a show in under 3 hours. The MARC commuter rail can take you to BWI (Baltimore) airport and other destinations. D.C.’s Metro subway system is great. The Metro Bus and the Circulator takes you where the subway does not. Under no circumstances rent a car. Parking is in short supply and the D.C. drivers have one hand on the horn at all times. You can walk everywhere or hop on the Metro.