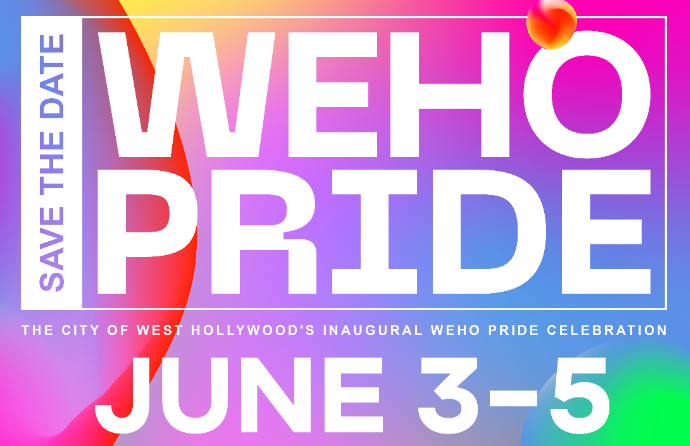 What’s New in West Hollywood for 2022? New hotels, restaurants, and plenty of Pride!

West Hollywood has always been home to the gays, and this year there’s many Pride festivities happening in June, along with new accommodation and dining options, and a few suggestions on where to work out and freshen up.

WeHo Pride Weekend (June 3-5) celebrations in and around West Hollywood Park (located at 647 N. San Vicente Blvd.) will include a free WeHo Pride Street Fair representing a diverse array of LGBTQ+ community groups as part of visibility, expression, and celebration. As well, there’s a 3-day ticketed OUTLOUD Raising Voices Music Festival, and the inaugural WeHo Pride Parade. Additional details on these events can be found here.

Giveaway: This year, in celebration of Pride Month, West Hollywood is offering us all a chance to win a two-night stay at one of the city’s most iconic luxury boutique hotels! The application deadline is June 30, 2022, and can be accessed here. One entry is allowed per person, and the winner must redeem their hotel stay by December 31, 2022. Airfare is not included.

The city’s 19 hotels each boast their own distinct character, ensuring that visitors will feel at home here. New to the West Hollywood hotel offerings is the West Hollywood EDITION by Marriott International in partnership with world-famous designer Ian Schrager, bringing luxury and exclusivity to the Sunset Strip. The property features 140 guestrooms and 50 suites and 20 residences, plus a rooftop pool, basement club and signature restaurant led by Michelin-Starred Chef John Fraser, a lounge and full service spa in between. Also debuting on the iconic Sunset Strip is the 1 Hotel. Featuring 235 guestrooms and 50 suites, including dual penthouses perched atop the city skyline and a rooftop bar, the 1 Hotel celebrates the natural California lifestyle with a conscious earthy design and dramatically sweeping views from floor-to-ceiling windows.

Helmed by Top Chef Season 3 winner Hung Huynh, the just-opened Warrior Lounge caters to the nightlife culture of West Hollywood, with an eclectic Asian menu of creative fare. Michelin Starred Chef and California native John Fraser spearheads the West Hollywood EDITION’s signature Ardor restaurant. Renowned as one of the best vegetable chefs in the world, Fraser’s menu features an artful balance of produce and meats, using techniques from around the world and products sourced hyper-locally.  In the new 1 Hotel, 1 Kitchen serves up truly California farm-to-table fare, as the restaurant is sustained by the on-site, 100% organic garden and beehive and the fresh creations of Executive Chef Chris Crary.  Also new to West Hollywood is the highly anticipated Olivetta, led by Chef Michael Fiorelli, who is known to champion flavors of the Mediterranean from Greece to France, Italy and Spain. Fresh, a vegetarian paradise in Toronto for 20 years, has arrived in West Hollywood on Sunset Blvd., serving up its famously crave-able plat-based dishes, including a full line of raw, organic pressed juices, craft cocktails and extensive menu of delicious food from small bites to indulgent entrees.

Where to Workout and Be Well

New on the wellness front are two membership-based options that take the fitness culture of L.A. and blend it with the cool factor of belonging to an exclusive club. Remedy Place is a social club that promotes the balance of health and fitness through treatments like cryotherapy, hyperbaric oxygen therapy, ice and sound baths and a host of other current modalities. Meanwhile, Monarch focuses its approach to balance beyond the physical, fostering fitness as well as personal growth and optimization. Health House, the first dedicated rowing studio that combines crew mentality with full-body burn, has hit the WeHo fitness scene. This is the place for anyone who wants to chisel from head to toe and only has 45 minutes a day to do it. High-energy and high-tech, Health House takes your goals to the next level.

Where to Freshen Up

With its first flagship store on the U.S. West Coast, Face Gym has opened in the 1 Hotel on Sunset Blvd. The latest innovation to West Hollywood’s fitness and beauty regimen involves a bevy of “workouts” for the face, courtesy of the professional Face Trainers at Face Gym. The concept approaches facial rejuvenation beneath the skin’s surface, targeting more than 40 facial muscles with massaging, sculpting and contouring exercises. From vitamin-rich treatments to electrical stimulation and deep detox, the Face Gym aims to give guests that post-workout glow in a variety of ways.