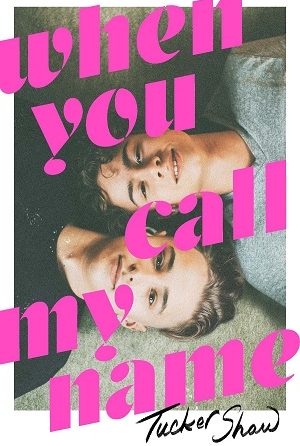 Tucker Shaw’s When You Call My Name is a heartrending novel about two gay teens coming of age in New York City in 1990 at the height of the HIV/AIDS epidemic. Film fanatic Adam is seventeen and being asked out on his first date—and the guy is cute. Heart racing, Adam accepts, quickly falling in love with Callum like the movies always promised.

Fashion-obsessed Ben is eighteen and has just left his home upstate after his mother discovers his hidden stash of gay magazines. When he comes to New York City, Ben’s sexuality begins to feel less like a secret and more like a badge of honour.

Then Callum disappears, leaving Adam heartbroken, and Ben finds out his new world is more closed-minded than he thought. When Adam finally tracks Callum down, he learns the guy he loves is very ill. And in a chance meeting near the hospital where Callum is being treated, Ben and Adam meet, forever changing each other’s lives. As both begin to open their eyes to the possibilities of queer love and life, they realize sometimes the only people who can help you are the people who can really see you—in all your messy glory.

A love letter to New York and the liberating power of queer friendship, When You Call My Name is a hopeful novel about the pivotal moments of our youth that break our hearts and the people who help us put them back together.

Available from MacMillan Publishers Read an excerpt below.

Tucker Shaw is a writer and editor who first found his family in New York City’s East Village in 1991 when he was twenty-three. Over the decades he’s worked in magazines, newspapers, and advertising, When You Call My Name is his first novel for Henry Holt Books for Young Readers.

So welcome to the world, yeah.

Soon, Adam will know every part of the boy. Every plane, every crease, every shadow, every ridge. He’ll tally and retally the freckles that swirl across his skin like constellations, over his chest and around his shoulders and into the shallow dimples at the base of his back. He’ll know the vibrations of his voice and the lines of his palms and the steady rhythm of his sleep.

Soon, but not today. Today Adam only knows what he can see: a boy, or maybe a man, standing in the January sunshine with his collar turned up against the cold, waiting for an answer.

“Will you come?” he asks again. He is not impatient. He smiles.

Look at him. Look at how tall he is, a head higher than Adam. Look at his eyes, at how they are set asymmetrically, the left higher than the right. Or is that just the way he’s tilting his head? Look at the rebellious curls at the edge of his watch cap. Look at his beautiful nose. Just look at him.

An icy gust swipes Adam’s face, blowing his hair into his eyes. He squints through the strands. He shivers. Why can’t he ever remember his hat?

Adam twists one foot inward, making pigeon toes. He presses down to feel the sidewalk beneath his sneaker. Gravity. He studies the boy’s eyes, first the left, then the right, then back again. Clear eyes. Placid. Hopeful.

Will you come? It’s a simple question. Adam knows how this works. He’s seen it in a thousand movies, rehearsed it a million times in his mind. A stranger stands before you. He says his line. He asks his question. Now it’s your turn. Answer, and your story will begin. Adam bites his lower lip, conjuring courage.

A taxi scrapes around the corner, dragging its damaged muffler across the asphalt as it rolls toward Christopher Street. The clatter sends up sparks and Adam can feel its vibration in his teeth. It’s one of the old cabs, a Checker, and when you see one of those you get to make a wish. Adam makes his wish. The taxi lurches through the intersection and away.

His eyes drift to a gathering of freckles at the side of the stranger’s face, just there, just at the temple. Look carefully. See? A pulse, his pulse, steady and expectant and alive.

The lenses of Ben’s eyeglasses are smudged with pomade and the bus windows are fogged up with everyone breathing, so he can’t see much as the Greyhound lumbers through Midtown. It rolls with excruciating sluggishness, taking a half hour just to cover the final few blocks into Port Authority.

Its slow pace fits the day. The ride down from Gideon should take an hour and change but today it took a lifetime. You can’t ever tell with traffic. Ben’s already read, cover to cover, the copies of Vogue, Interview, and i-D that he bought at the station on the way out, and he’s listened to the Beloved’s Happiness CD all the way through three times. He’d listen to it again if his Discman’s batteries hadn’t died. He should have taken the train.

Ben pulls his hand into the sleeve of his sweatshirt and swipes it across the window to create a little peephole in the foggy glass. He knows it’s a clear day, but you can barely tell here in the shadows of Midtown. The sun is up there somewhere, but a hundred buildings obscure it.

Streams of people in winter coats of gray and brown and olive and black course along the sidewalk, gathering into antsy pools at the intersections to wait for the walk signal. They hold their scarves to their throats and turn away from the wind to shield their faces.

When the signal comes, some dart across, leaning into the cold. Others trudge slowly, each step a groaning labor. No one looks happy. It’s all so beautiful. Ben loves New York.

Suddenly, a man in a shockingly bright orange bomber jacket breaks from the drab stream of pedestrians and steps off the curb, scanning the traffic as if to jaywalk. He looks familiar. Could it be? Ben swabs at the window again. Yes. It is him. Marco. Right there on Ninth Avenue. Ben would know him anywhere.

Two years ago, when Ben was a sophomore, a junior named Marco got jumped at the end of the school day. They pushed him into a maintenance closet outside the music room and broke off the doorknob, trapping him inside. They spray-painted QUEERS GET AIDS across the door and vanished. No one found Marco until the next morning, when a custodian dismantled the door and found him huddled against the wall, vomit covering his shoes. The administration called in a hazardous waste specialist to disinfect the closet—the door said AIDS after all—but they never called the police. Soon everyone was saying that Marco brought it on himself. You can’t just walk around with earrings in both ears and a Culture Club T-shirt without consequences, they said. It was conspicuous. Marco got what was coming to him.

Marco stands tall, a confident posture. Just then, a swirl of steam from a manhole envelops him, the white cloud amplifying the electric orange of his jacket. It looks like a fashion photograph in one of Ben’s favorite magazines. If he were the stylist, though, Ben would swap out the orange jacket for something less obvious. Oxblood maybe, or emerald. Something just as arresting, but a little less garish.

Ben blinks, and Marco vanishes, swallowed back into the city. The bus pulls into its berth at Port Authority, and everyone jumps up and into the aisle, pushing and sighing and clicking their tongues. Ben waits until the whole bus empties out, then takes down his duffel bag and goes in search of a pay phone. He needs to call his brother. He needs to call Gil.

It’s not such a big deal. The boy—or man? no, let’s go with boy for now—is only asking Adam to see Tremors, the new Kevin Bacon horror movie that’s supposed to be more funny than scary. It’s just that no one’s asked Adam to the movies before. Not like this. Not a customer.

Sonia’s Village Video had been thronged all morning with harried customers stocking up on movies before the snowstorm Sam Champion promised on Eyewitness News. Sonia loves storm warnings, because nothing is better for the video rental business in New York. But busy days deplete inventory, and Adam spent most of his shift disappointing customers from behind the counter. No, you can’t rent more than three tapes at a time; no, we don’t have Drugstore Cowboy on Beta; no, we don’t carry that kind of movie here, but check over at the Pleasure Chest on Seventh Avenue.

Soon it was one o’clock, the end of Adam’s shift. The rush had slowed to a trickle. Adam peeled off his stiff retail smile and took his pale blue parka down from the hook. “I’m clocking out,” he said, shrugging the jacket over his shoulders.

“Gimme two more minutes?” Sonia asked. “I have to pee.” She darted through the green-and-purple beaded curtain she’d hung over the entrance to the back office. It rippled and clacked in her wake.

There was a customer standing at the register. A very tall customer. A very tall, very cute customer with messy, uneven curls matted slightly on one side. Bed head or hat head, one or the other. Adam considered both.

“I think I have a tape on hold. The name is Keane.”

“Callum Keane.” Adam enunciated the sounds. Two hard guttural clicks with a hum in between and a fade-out finish. Callum Keane. He didn’t know yet that he would remember this name forever.

Adam crouched down behind the counter, where two shelves held the reserved videos, each labeled with a pink Post-it note. He scanned the names: Ramón, Barillas, Inkpen, Zakris, Keane.