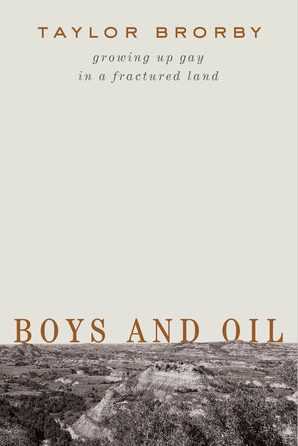 Boys and Oil: Growing Up Gay in a Fractured Land – an environmental queer memoir from North Dakota

In Boys and Oil: Growing Up Gay in a Fractured Land, by Taylor Brorby, brings new focus to an ignored region of the country whose rich resources—its land and its people—are too often unappreciated. In his hometown of Center, North Dakota, there are no stoplights, grocery stores, or motels, just a few bars and churches, with pews filled on Sundays by men who will return to the coal mine or the power plant on Monday. Here Brorby recounts his story.

Brorby recalls his upbringing in a trailer house in Center, and later in Bismarck; his adolescent infatuation with books; and how he felt intrinsically different from other boys in his home state, a state that ranks first in binge drinking. Childhood memories of picking chokecherries and fishing for bluegill with his beloved grandfather are soon replaced with the recollections of a closeted adolescent—of taunting and mocking, even beatings, from peers. Still, Brorby remained in North Dakota until he was outed to his family, and it became clear that to survive home, he had to leave first.

“I am a child of the American West, a landscape so rich and wide that my culture trembles with terror before its power.” So begins Taylor Brorby’s Boys and Oil, a haunting, bracingly honest memoir about growing up gay amidst the harshness of rural North Dakota, “a place where there is no safety in a ravaged landscape of mining and fracking.”

In visceral prose, Brorby recounts his upbringing in the coalfields; his adolescent infatuation with books; and how he felt intrinsically different from other boys. Now an environmentalist, Brorby uses the destruction of large swathes of the West as a metaphor for the terror he experienced as a youth. From an assault outside a bar in an oil boom town to a furtive romance, and from his awakening as an activist to his arrest at the Dakota Access Pipeline, Boys and Oil provides a startling portrait of an America that persists despite well-intentioned legal protections.

In chapters that could be stand-alone essays, we see Brorby easing into his own skin, acknowledging both the beauty and rough edges of his rural upbringing, and discovering that he is far from alone. He describes one small town as, perhaps improbably, “a gay Mecca”). In the end, he writes, “I no longer feel ashamed for the person I am.”

Brorby decides to go to high school in the state capital and college in Minnesota.  A decision to flee North Dakota—physically, but never spiritually. The first environmental queer memoir from the Great Plains/Intermountain West, BOYS AND OIL explores one family’s multigenerational relationship to the fossil fuel industry, Brorby’s environmental education, and being the first person arrested over the Dakota Access Pipeline in Iowa in 2016 after living in the Bakken oil fields.

He wrote a book that shows his struggles with contemplating suicide to show why, especially in rural America, representation for queer youth matters—what it’s like to live in that part of the world as a gay boy and man.

North Dakota is the least-visited state in the country. There are very few writers from North Dakota. But North Dakota’s history is fascinating, and we should pay more attention to it.

How our ability to live hinges upon the power plant where his mother worked. Project Tundra, a carbon capture and storage project, is being proposed a few miles outside of Center, North Dakota, where I he grew up. The technology, if approved, would keep us reliant upon fossil fuels while storing fatal biproducts (such as liquified carbon dioxide) 6,000-feet below Earth’s surface. It would push us over the brink.

Taylor Brorby is an essayist and poet. The coeditor of Fracture, his work has appeared in the Huffington Post, Orion, and North American Review, where he is a contributing editor.