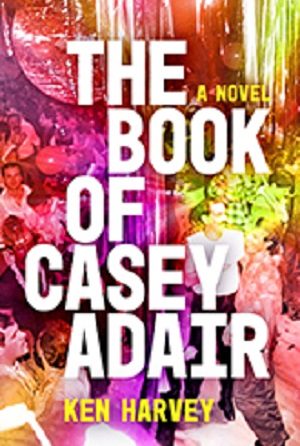 In the late-1930s, writers as diverse in their outlook as George Orwell, Emma Goldman and Ernest Hemingway flocked to Spain in search of writing material. They quickly found it, as the country was in the midst of a civil war. Sometimes, however, writers find themselves unintentionally wrapped up in real-life events as intoxicating as any account, fictional or otherwise, that they might create.

The Book of Casey Adair is Ken Harvey’s fictional rendering of post-Franco Spain in the early 1980s. His protagonist, the young theatre student Casey Adair, has arrived there from the US, only to find himself in the midst of an attempted coup and his campus a hotbed of student activism.

The book is crowded with eager and excitable young characters, including Adair’s lovers and fellow students. Harvey brings out Adair’s naiveté as he struggles to fit in, both as an actor and as an activist. The tension ratchets up as he finds himself facing conflicting loyalties with friends and colleagues and his own desires as a young gay man coming to terms with his sexuality.

Told through letters by Adair, his friends and mentors, as well as a writer of political tracts, each voice is distinct and convincing. This epistolary account of those times rings true in so many ways that the framework of letters will leave you wondering just how much—or how little—has been fictionalized.

While the outward events of the time turned out to be only a pale reminder of the civil war, Harvey nicely counterpoints the external drama with Casey’s exploration of his sexuality and the additional drama of having it sideswiped by the newly arrived AIDS virus. If you were there, you will remember.

This is quite simply a marvelous book. The spirit of Spain at a pivotal moment in its history shines through on every page, as does the LGBTQ community’s dawning awareness of the grave crisis it is about to face. Read it and weep for what it tells us about the passing of time and all we have lost.