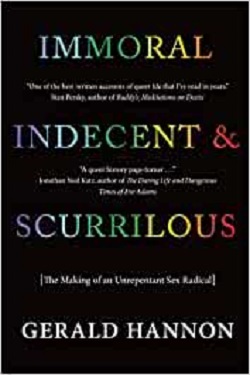 When eighteen-year-old Gerald Hannon left his small mining community in Marathon, Ontario to attend the University of Toronto, he never would have predicted he’d become part of LGBTQ2S+ history. Almost sixty years later, he reflects on the major moments in his career as a journalist and LGBTQ2S+ activist. From the charges of transmitting immoral, indecent, and scurrilous literature laid against him and his colleagues at The Body Politic to his dismissal from his teaching post at Ryerson University for being a sex worker, this memoir candidly chronicles Hannon’s life as an unrepentant sex radical.

“At least by reputation, I am a sex radical: gay activist dating back to the Cretaceous, defender of pedophiles, defender of (and participant in) sex work, sometime porn actor and maker, shameless voyeur (no window is safe if my binoculars are at hand), perpetual sour-puss on the subject of gay marriage. I came of age in the 1960s and ’70s, an era when most of those character traits and activities would have been seen as illegal at worst and shameless at best. Some still are. Others — gay marriage, for example — have switched sides, transitioning from what many people thought of as an unthinkable and illegal travesty to a ritual celebrated in a growing number of jurisdictions, Canada included.”

Gerald Hannon was a journalist and has been an LGBTQ+ rights activist since the 1960s. Hannon won thirteen National Magazine Awards and written for the likes of The Body Politic, Xtra!, and Toronto Life. Originally from Marathon, ON, he spent his remaining days in Toronto.