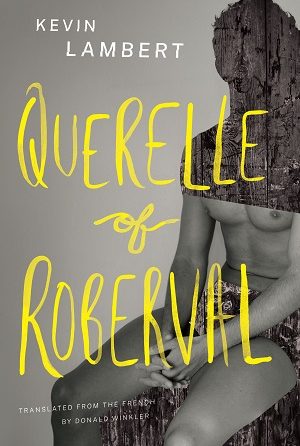 Querelle of Roberval – a Quebecois tale of justice, revenge, murder, and sex

Querelle of Robertval tells the story of a millworkers’ strike in the northern lumber town of Roberval, Quebec. As the strike drags on, tensions start to escalate between the workers. When a lockout renews their solidarity, they rally around the mysterious and magnetic influence of Querelle, a dashing newcomer from Montreal. Strapping and unabashed, likeable but callow, by day he walks the picket lines and at night moves like a mythic Adonis through the ranks of young men who flock to his apartment for sex. As the dispute hardens and both sides refuse to yield, sand stalls the gears of the economic machine and the tinderbox of class struggle and entitlement ignites in a firestorm of passions carnal and violent. Trenchant social drama, a tribute to Jean Genet’s antihero in Querelle of Brest, and a brilliant reimagining of the ancient form of tragedy, Querelle of Roberval, winner of France’s Marquis de Sade Prize, is a wildly imaginative story of justice, passion, and murderous revenge.

Interesting tale that combines small town politics and gossip, with a dose of murder and making out. Readers beware that this story can take a twist at any moment in time. So while you’re wrapped up in the latest strike action or unionized activities, you’ll soon be hearing of the wild, and vivid, sexual escapades of the charming young and horny Querelle. Without giving too much away, just have an open mind when it comes to the sexual antics that includes everything from threesomes and bondage to necrophilia. The narrative style of the author makes for a well-versed novel, and he provides a personal anecdote on page 137 that also warns that the remainder of the book maybe shocking to some. So you’ve been warned, now go ahead and read this!

Winner of the Marquis de Sade Prize. Available from Biblioasis.