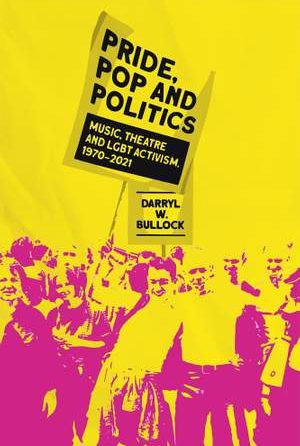 Pride, Pop, and Politics – 50 Years of LGBTQ+ Politics and Pop Culture in the UK

Pride, Pop and Politics charts the development of gay culture and the rise of LGBTQ politics in the UK, from the formation of the Gay Liberation Front to the present day, through the music that provided the soundtrack.

Fifty years on from Britain’s first Pride march, the long road to LGBT equality continues. Through protest songs and gay club nights, street theatre activism and fundraising concerts, the performing arts have played an influential role in each great stride made.

With new interviews with musicians and DJs, performers and activists, including Andy Bell, Jayne County, John Grant, Horse McDonald and Peter Tachell, Pride, Pop and Politics hears from those whose art has been influenced by the campaign for LGBT rights – and helped push it forward.

This informative, eye-opening book is the first to focus on the relationship between gay nightlife and political activism in Britain.

Darryl W. Bullock won the prestigious Penderyn Music Book Prize in 2022 with The Velvet Mafia, a thrilling account of the gay men who ran the swinging sixties.