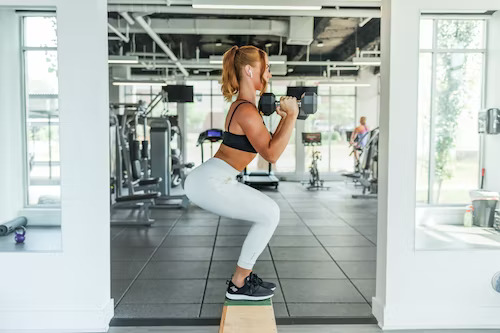 How Deanna Developed a Bigger Booty in Five Months

Meet Deanna. She’s a 29-year-old law clerk who wanted to have a curvier physique, plus more energy. She wasn’t able to wear the clothes that she wanted, and she was tired that she didn’t do the things that she wanted to do, like going out with friends, and more. She also wanted to get stronger to feel more confident and independent.

Fast forward a few months, and she’s achieved all that. How did she do it? That’s what we’ll talk about in this article.

If you’d like to hear all this straight from Deanna, you can check out her case study here

And if you also want a curvier body, we have a special program called “Build a Booty Program.” If you want to see whether you qualify for that program, just fill out the application form on our home page.

Deanna was no slouch. For years, she had been trying to get the curvy body that she saw on Instagram, but no luck. The 2 major things she’s tried are:

While the group fitness classes were both difficult and engaging, that difficulty didn’t translate to effectiveness. She sweated a lot, and breathed hard, but… her measurements didn’t change. She didn’t get any curvier.

With exercise on her own, she had problems with:

Consistency – she wouldn’t go to the gym consistently.

Effectiveness – when she was at the gym, she wasn’t totally sure whether what she was doing was correct and safe.

After spinning her wheels for a few years, she decided to take a more direct route – hire a personal trainer. I did a presentation at her mom’s workplace, so her mom had been a client of ours, so it was logical for Deanna to work with us as well.

For those reasons, it made sense to her to hire one of my team members.

But that decision was not without hesitations. A lot of people have hesitations before they start personal training.

Deanna was hesitant about the price, and whether she’d get along with her trainer, and whether that trainer was competent to help her with her goals.

On the price side of things, personal training ain’t cheap (especially with us). But Deanna (wisely) thought about price as being not just about money. Something can cost you time and health. She figured if she paid money, she’d save time on doing ineffective things on her own. You can make another dollar. You can’t make another minute. What she was going to spend in money, she would save in time (and frustration). In a lot of respects, time is more valuable than money.

As for whether the trainer was competent to help her with her goals, let me just say this – Igor don’t hire no fools 😉.

So after I did the initial assessment with Deanna, I set her up with her trainer. Her trainer’s name is also Deanna. Confusing, I know. So from this point forward, I’ll refer to the client as Deanna, and the trainer as Dee.

Once Deanna was ready, Dee designed her exercise program, with the goal of making Deanna curvier.

But let’s translate something – what does it mean to be “curvier”? It’s the butt. All about the butt. It just means increasing the size of the gluteal muscles.

Here are some of the highlights from Deanna’s program:

The 2 main movements used were the hip thrust and banded abductions.

One common mistake that people make when trying to work their glutes for the purpose of size is not using all the functions of the glutes. The gluteus maximus has 3 functions:

Abduction (moving the legs out)

For folks who don’t know their anatomy, they may only use 1 movement – but they’re missing out on 2 other functions of the glutes, and therefore, on some muscle fibres that could stand to grow.

But Dee knows her anatomy, so she didn’t make this mistake.

If you just read the above exercises, and thought “that’s it! That’s the secret to a bigger booty – hip thrusts and banded abductions”, then you’d be only partially right. That’s only part of the secret.

So Dee had Deanna varying the number of repetitions (and therefore, also the weight) she was doing each workout. But not haphazardly in a “what do I feel like doing today” kind of way. Rather, it was in a systematic, thought-out plan.

Why did Dee do it this way? For 2 reasons:

If I was to sum up the reason behind intensity variations, it would be “fatigue management”, and “maximal muscle fibre stimulation.”

How does Dee know when to increase or decrease the number of sets and reps? Again, this isn’t random.

This is balancing safety with effectiveness, and avoiding burnout.

While yes, the hip thrusts and banded abductions were the centerpiece of her program, there were other leg/thigh exercises, and upper body exercises.

Dee also added in single leg deadlifts, Bulgarian split squatsandgood mornings for the lower body, and a few other exercises for the upper body.

But only the hip thrusts and banded abductions were varied by their intensity/rep range, and employed soreness monitoring.

...if you want to read the rest of this article, visit HOW DEANNA GREW A BIGGER BOOTY IN 5 MONTHS

Igor Klibanov is the author of 7 books on exercise and nutrition, and the CEO and founder of Fitness Solutions Plus. He is a sought-after wellness speaker, having delivered over 400 presentations to some of Canada's largest corporations. Get a free PDF version of his book, STOP EXERCISING! The Way You Are Doing it Now - http://www.fitnesssolutionsplus.ca/stopexercising