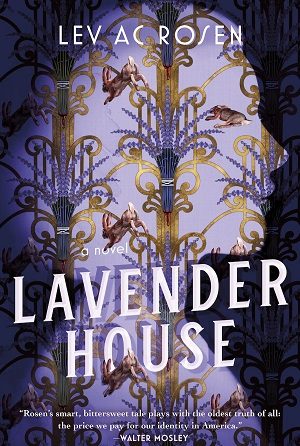 Lavender House, 1952: the family seat of recently deceased matriarch Irene Lamontaine, head of the famous Lamontaine soap empire. Irene’s recipes for her signature scents are a well guarded secret—but it’s not the only one behind these gates. This estate offers a unique freedom, where none of the residents or staff hide who they are. But to keep their secret, they’ve needed to keep others out. And now they’re worried they’re keeping a murderer in.

Irene’s widow hires Evander Mills to uncover the truth behind her mysterious death. Andy, recently fired from the San Francisco police after being caught in a raid on a gay bar, is happy to accept—his calendar is wide open. And his secret is the kind of secret the Lamontaines understand.

Andy had never imagined a world like Lavender House. He’s seduced by the safety and freedom found behind its gates, where a queer family lives honestly and openly. But that honesty doesn’t extend to everything, and he quickly finds himself a pawn in a family game of old money, subterfuge, and jealousy—and Irene’s death is only the beginning.

When your existence is a crime, everything you do is criminal, and the gates of Lavender House can’t lock out the real world forever. Running a soap empire can be a dirty business.

LEV AC ROSEN writes books for people of all ages, including Camp, which was a best book of the year from Forbes, Elle, and The Today Show, among others, and is a Lambda finalist and ALA Rainbow List Top Ten. He lives in NYC with his husband and a very small cat. You can find him online at his website and on social media.

I thought I’d have the place all to myself, this early. Like church on a Tuesday—no one but you and God—or in my case, the bartender. But there’s a guy and girl, high school kids or maybe just twenty, sitting at one of the booths in the back. They’re trying to keep their voices low, but he’s failing, getting angry. Something about wiener dogs. It’s weird the things people fight over.

He pounds the table and she whimpers a little. I sigh, feel my body shifting to get up. I don’t have to do this anymore. Hell, no one even wants me to. That’s why I was fired. But some habits you can’t break. So I down what’s left of my martini, motion the bartender to pour another, and stand up and go to the back of the place, where he’s holding her wrist, tight. Her arm is stretching like a shoelace as she tries to stand up, but he won’t let go. On her other wrist, she’s wearing a charm bracelet. Just a few charms: An eagle, that’s a mascot for one of the local schools, with “1950” under it, so she graduated two years ago. A book, so she’s a reader. A wiener dog, for her pet, I’m guessing, and the source of the argument. And an apple. Teacher’s favorite, or she just really likes apples, maybe. Not enough life lived for many charms. Not enough to cover the bruise, either.

“Mind your own business, pal,” he says. He talks like he’s seen too many mobster movies. Or maybe he’s just trying to match me.

“Miss, you want to leave?” I ask her, looking past him.

She nods, but doesn’t say anything, so I reach out and I pull back his finger from her wrist, hard. He yelps in pain but she gets loose and runs out of the bar, the little bell on the door jingling as it closes behind her.

“It’s too early for this, fellas,” the bartender says, the words coming out of him in one long sigh.

“I was just helping the lady,” I say, turning my back on the kid, walking back to the bar. I know he’s going to come up behind me, so I wait till I feel him, then spin and catch the fist as it connects with my shoulder. Not that hard. Just enough I wheeze a little, which makes him smile, like he’s won something. I don’t like that smile. Reminds me too much of the mirror. So I grab his wrist and yank his arm back.

He swings with his other fist, so I catch that one, too, and turn him around, holding his arms behind him.

“You can’t do this!” the kid says. He looks over at the bartender, who keeps his eyes on the glasses in front of him. The kid stares as I march him to the door and then turns his head around to look at me. “You’re drinking martinis? This early? That’s cool, man. I can buy you one. We can talk this out.”

I roll my eyes, kick the door open, and push him out of it, onto the ground. He goes face first, but I know he’ll just have a scrape. I’ve done this enough—before. Sometimes it makes me feel better, helping, like I’ve done some good in the world. Not today, though. Probably for the best. Might make me reconsider my plans.

He stares at me, the sun beating down on him and the concrete, like he’s waiting for me to say something.

“Don’t be rude to women,” I announce, loud enough someone across the street looks over. It’s the best I’ve got. I hiccup. Then I grin, ’cause I’m pretty drunk and I still managed to toss him out. And because I have another martini waiting for me.

“Screw you,” he says, getting back up, but it sounds weak and he knows it. I turn around and bounce off the glass door of the bar, which has closed behind me. There goes my heroic exit. The kid starts laughing, but I step back, rub my nose, and turn the handle, walking back in, the kid still cackling behind me.

I take my seat and drink the new martini in front of me in one swallow. The bartender looks at me like I’m the sorriest sight in San Francisco, and maybe he’s right, but I try not to let it show. I lift my chin and order another, keeping my voice even, proud. I’m proud to be in this bar at 2 p.m. on a Monday. I’m proud to have thrown some kid out on the street, even though it’s not my job anymore. Hell, I’m proud to be jobless, blacklisted. I’m proud to have just ordered my fifth drink. I’m probably not fooling anyone, but I can try. He mixes it for me turned away, and if he makes a face, I can’t see it. And with the kids gone, no one else is around to judge. I tap my fingers slowly on the bar. I’m patient. I have all day—that’s the plan: drink all day so when it’s dark, and no one will notice, I’ll be drunk enough to pitch myself into the bay.

I like the bay for it. It’s how Jan Westman was found. I remember looking at her on the shore of Stinson Beach, when we still thought it was just a case of a drunk falling into the bay. She looked peaceful. She hadn’t been in the water more than a night. Her skin was pale, a little blue, her eyes closed by the old man who found her and called in the local police, who called us after finding her ID. He’d folded her arms over her chest, too, and Lou said it was morbid, but I thought she looked relaxed, at ease with what had happened. I was actually surprised when her blood came back sober and we had to look at it as murder, and then when we caught the guy and found out what had been done to her. If a night in the water can wash away trauma, make a body like hers look serene, I think it can at least do it halfway for me.