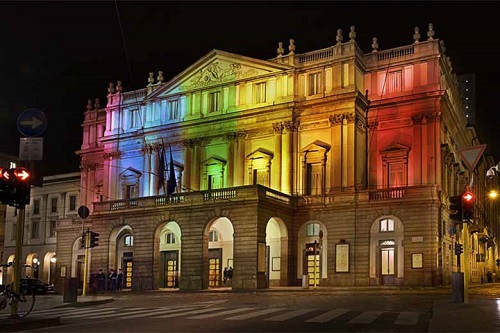 I attended the International Gay Lesbian Travel Association Conference held near  Milan and thoroughly enjoyed my trip to this vibrant, stylish northern Italian city. Located just south of the Alps in the northern part of the country, it is the country’s second largest (and wealthiest) area .The people are very stylish and there is lots to do.

You will find the Puerto Venezia neighborhood to be the designated gayborhood although Milan’s LGBTQ venues are actually more scattered. The neighborhood features lots of cafes, restaurants, and shopping (plus gay bars) within steps of each other and the metro is very is very convenient as it the Tram (street car). The Esselunga Supermarket features food to go where you can grab some fresh fruit and yogurt for breakfast.

I stayed at the Mercure Milano Centro Hotel, part of the Mercure brand by Accord Hotels. The service and rooms were great at this small hotel. It made for a perfect base to explore the city. It is located in the Piazza Oberdan in the Puerto Venezia district. The subway station is literally in front of the hotel. Cute shops and restaurants abound. The room was comfortable after I insisted, they let me control the room temperature instead of the front desk. An Italian restaurant was next door was on one side and a coffee bar on the other. And just steps to the bars, the city park (Giardini Pubblici) , and Buenos Aires street shopping district. However, skip paying for the hotel breakfast and enjoy one of the many nearby cafes for the morning double espresso and fresh baked roll (Like Spain, Italians don’t drink a regular cup of coffee although the Café Americano comes close.)

·         The Duomo cathedral and plaza are a must. Check out the nearby shopping at the Galleria Vittoria Emanuel.

·         Don’t miss the Sforzesco Castle. This huge fortress is complete with a moat and features works of Michelangelo and Leonardo da Vinci.

The city’s gay life is centered around the Porta Venezia neighborhood, specifically down Via Lecco (Lecco Street). Check out LeccoMilano, the Red Cafe, and MONO. They even have a LGBTQ friendly gelato stand.  The MONO Bar was great for an appertif.Appertivi is a pre-dinner semi sweet alcoholic beverage. Try the Aperol Spritz which consists of aperol, spumante, soda, and fetta di Arancia. The Mono offered it with free chips for 9 euros. This is a pre-dinner cocktail. Like in Spain, Italians eat late.

WHERE TO EAT/WHAT TO EAT

Do you like risotto, pasta, fresh breads, eggplant parmesan, pizza, smoked meats, or cheeses? How about wine? They all are Italian specialties. Great coffee is everywhere including the Coffee Joint next door to the Mercurio Hotel. Enjoy a cocktail on the rooftop bar of the Dome Milano (Via Giuseppe Mazzini).

I took EasyJet from Barcelona to Milan. It was cheap but modelled after the U.S. budget airlines (charge for everything including a carry-on bag, on board beverages, etc.). They made us stand in the jet way for a half hour before letting us sit down and then they announced a delay due to a crew change. But I made it. And it is reportedly better than Ryan Air, another budget carrier as well as Veuling Airlines.

I took American Airlines from Milan to JFK. The lengthy flight (7.5 hours) went over the Alps as well as the Maritimes of Canada and Boston Harbor. The meal service was good (pasta or meat balls) followed by ice cream and then a pizza snack before landing. The free wine and beer was a surprise. I am growing to like American Airlines.

From Malpensa airport, take the Malpensa Express train (13 Euros) to the Carbano metro stop and transfer to the M1 subway line to get to the hotel. The subway is known as the ATM and you can get an all day pass for 7 Euros.

The International Gay Lesbian Travel Association had their 38th Global Convention in Pero. 550 attendees from 39 countries attended. Key themes included that travel is an agent of change.

Despite all the pasta, bread, smoked meat, and cheese (not to mention the tiramisu), the Italians are a slim bunch with only 10 percent being overweight. The Mediterranean diet is very healthy, and they don’t snack and graze all day like many (overweight) Americans do.

The chic dressed up Milanese are amazing. Perfect stylish haircuts, modern eyewear, and designer outfits make them the best dressed folks in the world. Italian design also spills over into the architecture and autos (Porsches). I had never been to Italy and was stunned at this classy crowd. Even the barista at the coffee bar looks like she is headed to a wedding. Leave room in your suitcase for some shopping.

With the Euro at par with the U.S. dollar, Italy (like Spain) is a bargain right now. Before you book a domestic vacation, compare it with a trip to Europe. Air fares are more reasonable for travel to Europe than they are to many U.S. cities and the hotels are about the same (but still a bit high for this value traveler).

Pick up a copy of VIVA (vivaboy.com) has a listing of bars and restaurants throughout Spain. Also check out yesmilano.it. Don’t miss Milan’s only printed publication, Quiiky Magazine or take a tour with Quiiky Travel. Visit IGLTA’s website for all your LGBTQ+ travel resource needs. Also check out the official Milan tourism website.

Special thanks to Visit Milan, Sonders and Beach, Visit Ft. Lauderdale, and Quiiky Magazine for hosting events at IGLTA.