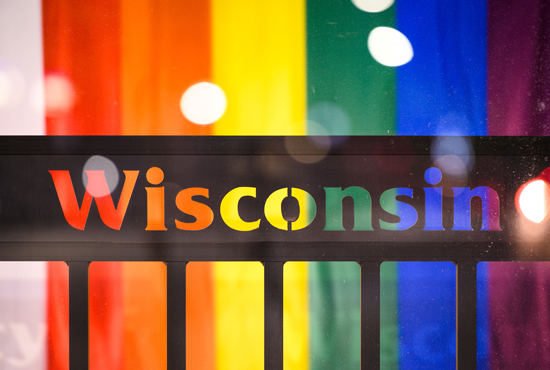 A few years ago, I remember reading that Madison, Wisconsin was voted one of the top LGBTQ-friendly destinations in the country. Since I have a propensity to travel to under-the-radar destinations, I decided I wanted to see for myself what made Madison so special and inclusive.

Madison is the capitol of Wisconsin, a swing state in the political world, so it was no surprise that I was greeted with open arms upon arrival. The first thing I noticed was how clean and walkable the city was. It is fairly simple to walk to most attractions if you are staying in the heart of downtown. If the attraction is a bit far, you can rent a bike from the citywide BCycle bike share program.

Start your tour of Madison at the Chazen Museum Of Art located on the University of Wisconsin campus. The free museum houses a collection of over 24,000 works ranging from a painting by Andy Warhol to artifacts from ancient Greece, Western Europe, and Moghul India,

Continue your cultural tour of Madison at Art + Lit Laboratory, a community-driven contemporary arts center in the Capitol East District which houses an art gallery and performance space in addition to a library, artist studios, and a dedicated education studio. The facility welcomes over 200 events annually ranging from lectures to contemporary dance classes.

Before heading out for dinner, check in to the AC Hotel Madison Downtown, a beautiful property located a block away from the Capitol Building which officers beautiful 360-degree views of the city from its rooftop patio. The modern AC Lounge is located just off the reception area and features a towering LED sculpture that serves as the centerpiece of the space. Located on the top floor is Eno Vino, the hotel’s signature restaurant which features an extensive wine menu consisting of over 200 bottles.

The rooms at AC Hotel Madison are quite spacious and blend in with the property’s minimalist vibe. I had a wonderful view of the Capitol building from my room which was even more breathtaking during sunset.

For dinner, take a short Uber-ride to Mint Mark, a produce-forward restaurant operated by James Beard Award nominated Executive Chef Sean Pharr. The relaxed space is welcoming but sophisticated and offers a variety of tapas ranging from a delicious Cauliflower dish consisting of herbs, raisins and crispy sarvecchio to Sorpresine made with ricotta, butternut squash, fermented plum and pecans. If you like pasta, I’d recommend the Carbonara. It was my favorite item on the menu.

I happened to be in town during GLEAM, an evening light exhibition which takes place at the Olbrich Botanical Gardens and features large scale light installations created by local, regional, and international designers. This is a fun activity to go to with a group of friends or just stroll throw on your own. Get there early to beat the crowds.

If you still have energy, head to Woof’s, one of the city’s LGBTQ bars, located just a short walk from the hotel. The space is owned by the same people who own D’Vino, a neighboring Italian restaurant. Woof’s offers one of the best happy hours in the city with half-price drinks from 4-7pm.

Every Wednesday and Saturday, the city welcomes the Dane County Farmers’ Market on the Square. Over 150 vendors participate each week, and the market is the largest producer-only farmers’ market in the country. All of the items for sale at the market are produced by the vendors themselves. Even though I didn’t purchase anything, it was a great way to start the day. If you have time, book a tour of the Capitol building, an architectural wonder worth visiting which contains the only granite dome in the United States. The building houses both chambers of the Wisconsin legislature along with the Wisconsin Supreme Court and the Office of the Governor. After your tour, grab a bowl of ramen at Morris Ramen, owned by State Representative Francesca Hong.

Next up was a tour of the Henry Vilas Zoo, one of only a few admission-free, community-supported zoos in the country. The zoo just welcomed a baby orangutan, and I had the chance to see it along with its mother in the primate habitat. If you have time, take one of the behind-the-scenes tours offered at the zoo. I decided to jump on the African Adventure Behind the Scenes Tour where I got to meet and feed the zoo’s beautiful, reticulated giraffe Eddie. You really don’t appreciate how tall these animals are until you are standing a few feet away.

Also, part of the tour was a visit with their white rhino named Harmon. Unfortunately, Harmon was basking in the sun during my visit and didn’t want any of the treats we brought for him. After a few minutes of trying to seduce Harmon with food, we decided to let him relax and soak up the rays.

Next, head to Monona Terrace Community and Convention Center, a Frank Lloyd Wright designed building located on the shore of Lake Monona. Wright designed the building decades before it was built. He fought with the city multiple times to try to get them to agree to build the facility and sadly he didn’t get to see his wonder come to fruition. The Monona Terrace finally won city-wide approval after Wright’s death and now serves as a tribute to his contribution to Madison.

Touring around Madison will surely make you hungry, so try out Heritage Tavern. The farm-to-table restaurant is operated by chef/owner Dan Fox, a James Beard Award-winner. It was one of my top 10 dining experiences ever. I began my meal with a new addition to the menu, a sweet corn chowder served with popcorn of course. I was in awe of how delicious this soup was and felt bad not finishing the bowl as I had to save room for some other selections including the chef’s upscale take on deviled eggs. I can’t even explain what was on them, all I can say it you must try these. You won’t be disappointed. For my entrée I ordered the Bouillabaisse served with an assortment of fish, fingerling potatoes and roasted fennel bathing in a saffron tomato broth with garlic sabayon.

I really wanted to walk off my food coma, but I had tickets to the Madison Ballet’s production of “Next Steps”, a program built entirely of world premieres, and featuring the work of Artistic Director Ja’ Malik and Richard Walters. The ballet is committed to celebrating female-identifying choreographers and showcases San Francisco-based Marika Brussel.

After the ballet, head to one of the city’s other LGBTQ-establishments including Shamrock Bar & Grille or Sotto Nightclub for a nightcap.

Before heading home, grab breakfast at Short Stack Eatery, an LGBTQ-owned restaurant located close to campus which offers a selection of favorites including of course, pancakes. I decided to try the sweet potato pancakes which were served with fresh strawberries. The oversized portion could have fed two people and was so delicious. And even though I didn’t have one, I heard they also make a killer Bloody Mary.

One other thing that stood out during my trip to Madison was how friendly the people are. Everyone greets you with a smile. There is nothing like Midwest hospitality.