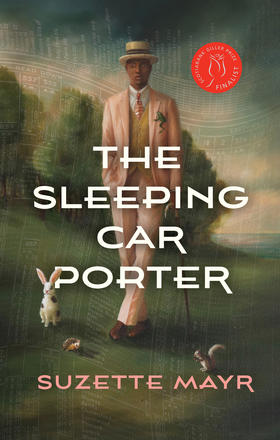 Suzette Mayr has been named the winner of the 2022 Scotiabank Giller Prize for her novel, The Sleeping Car Porter, published by Coach House Books, taking home $100,000 courtesy of Scotiabank.

Of the winning book, the jury wrote:

“Suzette Mayr brings to life –believably, achingly, thrillingly –a whole world contained in a passenger train moving across the Canadian vastness, nearly one hundred years ago. As only occurs in the finest historical novels, every page in The Sleeping Car Porter feels alive and immediate –and eerily contemporary. The sleeping car porter in this sleek, stylish novel is named R.T. Baxter –called George by the people upon whom he waits, as is every other Black porter. Baxter’s dream of one day going to school to learn dentistry coexists with his secret life as a gay man, and in Mayr’s triumphant novel we follow him not only from Montreal to Calgary, but into and out of the lives of an indelibly etched cast of supporting characters, and, finally, into a beautifully rendered radiance.”

When a mudslide strands a train, Baxter, a queer Black sleeping car porter, must contend with the perils of white passengers, ghosts, and his secret love affair

The Sleeping Car Porter brings to life an important part of Black history in North America, from the perspective of a queer man living in a culture that renders him invisible in two ways. Affecting, imaginative, and visceral enough that you’ll feel the rocking of the train, The Sleeping Car Porter is a stunning accomplishment.

Baxter’s name isn’t George. But it’s 1929, and Baxter is lucky enough, as a Black man, to have a job as a sleeping car porter on a train that crisscrosses the country. So when the passengers call him George, he has to just smile and nod and act invisible. What he really wants is to go to dentistry school, but he’ll have to save up a lot of nickel and dime tips to get there, so he puts up with “George.”

On this particular trip out west, the passengers are more unruly than usual, especially when the train is stalled for two extra days; their secrets start to leak out and blur with the sleep-deprivation hallucinations Baxter is having. When he finds a naughty postcard of two queer men, Baxter’s memories and longings are reawakened; keeping it puts his job in peril, but he can’t part with the postcard or his thoughts of Edwin Drew, Porter Instructor.

Suzette Mayr is the author of the novels Dr. Edith Vane and the Hares of Crawley Hall, Monoceros, Moon Honey, The Widows, and Venous Hum. The Widows was shortlisted for the Commonwealth Writers’ Prize for Best Book in the Canada-Caribbean region, and has been translated into German. Moon Honey was shortlisted for the Writers’ Guild of Alberta’s Best First Book and Best Novel Awards. Monoceros won the ReLit Award, the City of Calgary W. O. Mitchell Book Prize, was longlisted for the 2011 Giller Prize, and shortlisted for a Ferro-Grumley Award for LGBT Fiction, and the Georges Bugnet Award for Fiction. She and her partner live in a house in Calgary close to a park teeming with coyotes.

Listen to CBC Radio’s q tomorrow for an interview with Suzette Mayr and relive the gala at CBCBooks.ca.