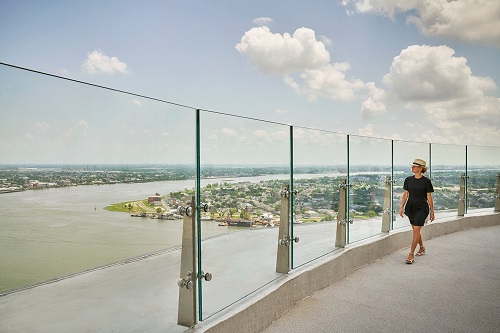 It feels like Mardi Gras on Bourbon Street every day in the French Quarter in New Orleans. Between the great food, the charm of the French Quarter, the amazing history, and the great LGBTQ+ night life, you can’t go wrong with a visit even in winter.

Freaky Friday means drag shows at the Oz Bar. You will find them at 800 Bourbon.

Café LaFitte in Exile at 901 Bourbon Street is the oldest gay bar in the U.S. It is still going strong.

Not gay but also worth a stop are:

The House of Blues at 225 Decatur is great for live music and a great bar.

Listening to the jazz band at the Ritz Carlton Davenport Lounge. It’s a nice break from the honky tonk noise of Bourbon and Canal Streets on a weekend night.

The red beans and rice and salmon are excellent at Landry’s. The have a great $18 lunch box special.

33 Galatorre’s Bar and Steak is a great option for meat lovers.

The 200 year old Napoleon House Restaurant is in a 200-year-old French Quarter landmark. The building’s first occupant was the mayor of New Orleans from 1812 to 1815, who offered his residence to Napoleon in 1821 as a rebuilding refuge during his exile. Napoleon never made it, but the name stuck

I stayed at the Marriott on Canal Street. Bargain hunters may also like the nearby LaQuinta. All the chains are here as well as boutique hotels.

I took Southwest to the new Louis Armstrong Airport and then took the E1 Jefferson Parrish Veterans-Airport bus from the 3rd floor departure area to downtown for just $2. Or take the RTA Airport Express route 202.

Pick up a copy of the weekly, Gambit.

Here are some informative links to plan your visit to the amazing Crescent City:

There is nowhere else like New Orleans. It makes for a great holiday.