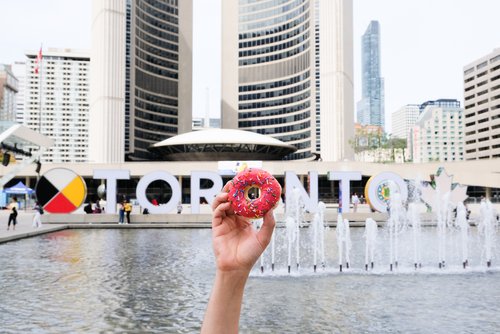 Underground Donut Tour is all about donuts, now in both Vancouver and Toronto

Underground Donut Tour was founded in the United States seven years ago, and has since expanded to Canada and Europe. They are the only tour operator solely focused on the delicacy that is donuts! The founders stated, “We’ve always had a passion for donuts, but only recently did we realize just how many other people do too. When we looked around, we didn’t see anything that truly celebrated donuts in all their glory, hence we created the Underground Donut Tour, the world’s only food tour specializing in donuts.”

This past summer was their first foray into Canada, with the launch of the Vancouver tour, and since then they have launched their second Canadian destination in Toronto. There’s no shortage of donuts to try, and if there’s something specific you’d like to try, the tour host would be happy to accommodate that request. As well, any leftovers can be taken home by participants, should anyone be so inclined after this delicious, delightful, donut tour. Additional donuts can also be purchased at each stop. The tours are small in size, and the donuts are purchased accordingly, so be sure to arrive hungry, and you will leave happy!

This tour takes guests to some of the most interesting parts of downtown Toronto, Kensington Market and Chinatown. Beginning at Cops Doughnuts right in the heart of the Fashion District, you’ll love their hot, fresh, and tiny doughnuts as well as their uber colourful aesthetic. From here, its over to Queen Street for the second stop at Bloomer’s Donuts. After a quick bit of history of the area and some donut sampling, it’s time to head over to the bohemian neighbourhood of Kensington Market. This area is a cosmopolitan melting pot of foods and individuals. Once your visual sensory subsides, it’s time to try some donuts at this unique shop located right in the thick of the Market area.

The tour begins very near downtown at Breka Bakery, one of Vancouver’s best bakeries that carries numerous delicious pastries, cakes, and of course, donuts. From there, it’s a leisurely walk over toward the Vancouver Art Gallery, and the second stop on the tour that offers authentic, hand crafted donuts made fresh daily. If lucky, you’ll see them being made right in front of us. Next, it’s a stroll along the waterfront over to the Olympic cauldron and Canada Place for the third stop. Then, finally it’s over to the  final stop at Cartems, which is consistently voted one of the best donut shops in Vancouver.

There are also several tours in cities across the USA listed on the website, as well as the European cities of Dublin and London.