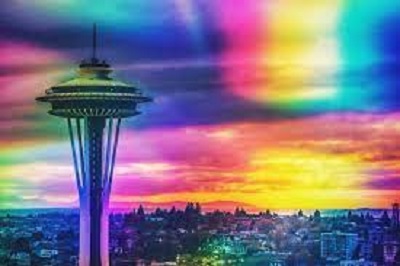 Seattle makes for a fine off-season winter weekend destination. The cruise crowds are long gone, the hotels are affordable, and the temperatures are mild compared to an east coast or Midwest winter. The downtown and Pike Place Market are vibrant again. While I was there, the Japanese clothier Uniqlo has just opened downtown to much fanfare. Stop by Pike Place Market to see the fresh local produce and seafood, and watch out for the flying salmon. The juice bar across the street has fresh carrot juice.

The Evergreen State is full of well, evergreens (douglas firs, cedars, and hemlocks) which gives Seattle and the region it’s unique feel. You can’t beat a city that features view of the Olympic Mountains to the West, the Cascades to the east, Mt. Baker to the north, and Mt. Rainer to the southwest. Seattle itself is nestled between Puget Sound and Lake Washington. This beautiful city is like none other in the U.S.

Take the ferry ($9 round trip) to Bainbridge Island to enjoy the great views of downtown, Mt. Baker, the Cascades, and to enjoy Puget Sound. Then stop by the nearby Aquarium to see the native fish and marine life. Get up close to a sea urchin. Stop by the amazing City Library on 4th Street which is an architectural wonder. Explore the city’s many neighborhoods including Ballard , the University District (and the UW campus), and more. Walk or run with the Frontrunners Saturday mornings at Green Lake Park .

Who says gay bars are dead? Wildrose at 1021 E. Pike is one of the country’s longest-running lesbian clubs. The new Union, at 1009 East Union on Capitol Hill also serves food. It’s obviously the place to be. Pony is close by. It has a patio and is a throwback to the bars of the Castro in San Francisco. Dance the night away at Neighbours night club which is still growing strong. Cuff’s  is a lot of fun (1533 13th Street). Dragster is yet another new bar in the Fremont neighborhood.

Try the red curry with salmon at the Bai Tong Thais Street Café (1121 East Pike). It’s the best Thai around. The H Mart at 1601 2nd Avenue has great food to go, including the salmon steak dinner for just $10.99. Seating available in the store. Pick up some Tom’s Potato Chips at Bartell Drugs, a regional favorite.

I always stay at the Baroness Hotel on First Hill (1005 Spring Street. This art deco treasure is a short walk up from the University Street light rail and close to Capitol Hill as well as the other attractions. You get a complete apartment including utensils, a living room, and bedroom. Plus it’s quiet and a bargain compared to the downtown hotels. Its sister hotel, the Inn at Virginia Mason, is across the street and also very nice and has a great breakfast. Rates for it too are reasonable. Also nearby is the historic Sorrento Hotel at 900 Madison. The landmark resembles a Spanish castle. Try the happy hour in the bar (the truffle fires go well with the Prosecco)  or enjoy a meal at Stellas. Both hotels are close to the restaurants and shops of Madison Street and just a mile to Pike Place market and 1.5 miles to the Space Needle. Or walk to the Monorail (.7 miles) to take it to the Space Needle and Seattle Center.

Take the Sound Light rail from the airport to the University Street Station in Seattle to get downtown.

Get a Seattle CityPASS and save nearly 50% percent on admission prices at various attractions. One simple purchase gives you admission to the Space Needle and Seattle Aquarium plus three more attractions to choose from,  including the Museum of Pop Culture, the Chihuly Garden and Glass Museum, the Woodland Park Zoo, or the Argosy Cruises Harbor Tour. It’s valid for nine days from when you first use. Buy an Orca card for use on the light rail from the airport as well as King County Metro (and the ferry).